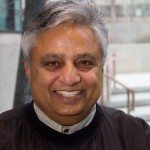 Zed, president of Universal Society of Hinduism, will also read a peace-related United Nations document on the occasion.

The International Day of Peace, established by the UN General Assembly and observed each year on Sept. 21, is an annual day of non-violence and cease-fire. “The UN invites all nations and people to honour a cessation of hostilities during the Day, and to otherwise commemorate the Day through education and public awareness on issues related to peace.”

Sponsored by Sierra Interfaith Action for Peace in Wingfield Park, about 40 community groups are expected to participate in a peace fair which will include folk and rock music, dance, art, yoga, displays and more. It will offer exploration of ways of creating a culture of peace and will feature Jonie Blinman, Mississippi Mitch, The Notables, Kim Elise, Chris Good, Sage Heart, hip hop dancers, Greek folk dancers and more, according to Lisa Stiller, one of the organizers.

Zed is one of the panelists for “On Faith,” a prestigious interactive conversation on religion produced jointly by Newsweek and washingtonpost.com. He has been awarded the “World Interfaith Leader Award” by the National Association of Interchurch and Interfaith Families.