Mark Thoma, writing for Money Watch, identifies the three basic types of unemployment. Frictional unemployment arises mainly from the combined movements of a free people. Cyclical unemployment, what most economists believed was the cause of the current recession, is the normal ups and downs of the business cycle. There is a growing body of evidence that the persistent unemployment we are experiencing may be structural:

…defined as unemployment arising from technical change such as automation, or from changes in the composition of output due to variations in the types of products people demand.

In a letter published on the Federal Reserve Bank of San Francisco‘s website, authors Mary Daly and Bart Hobijn find evidence of structural unemployment in a divergence in Okun’s Law, a law that has remained true for 60 years, until now.

In 1962 Arthur Okun, then a Yale University professor, had been tracking GDP and unemployment statistics dating back to 1949. He found that for every 2% that real GDP fell below its trend, there was a 1% increase in the unemployment rate. As time passed and the ratio held, this became known as Okun’s Law.

As seen by the red boxes in the chart below, Okun’s Law has remained consistent up until 2009. 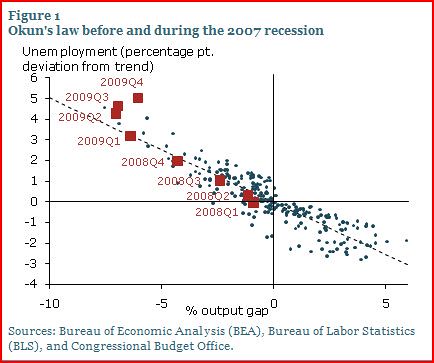 By permission of FRBSF

As Daly and Hobijn point out:

Evidence suggests that the reason for this was an unusually rapid rise in worker productivity. Output remained stable while businesses shed excess labor, as shown by GDP per hour in the chart below. 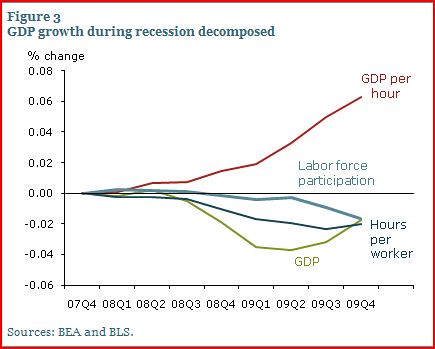 By permission of FRBSF

It should be remembered, however, that GDP is mostly measured on the buy side, not the sell side. In 1949 there was no such thing as a Japanese import. 1949 was the year of the communist take-over in China. In 1949, products stamped “Made in USA” were commonplace throughout the world. Measuring what was bought in America would produce a nearly identical statistic as measuring what was made in America. To put it mildly, things are a little different now.

There is also the difference between the industrial economy of 1949, and the service economy of today. It is much easier to lay-off a service worker and still maintain a reasonable amount of service, than to lay-off a manufacturer and maintain output. This could help account for the rise in GDP per hour.

In any case, economists are still sifting through the rubble of the recession that began in 2008 to understand what happened. Any decisions made by politicians now, will be based on incomplete evidence.