Las Vegas artist working on Gov. Gibbons painting despite not being selected for official portrait

by Sean Whaley, Nevada NewsBureau: Budding Las Vegas artist Alex Krasky was not selected to paint the official portrait of out-going Nevada Gov. Jim Gibbons for display in the state capitol, but he is going ahead with his canvas anyway with the hopes of personally presenting his work to the governor.

When he first learned of the competition to paint the governor’s portrait and submitted his proposal, Krasky decided to go forward with a painting without knowing if he would be selected. When he was not named as the finalist, Krasky said he was already well in progress on the portrait and decided to finish the work.

“I already spent a couple of weeks drawing it so I decided just to keep drawing because, what do I have to lose,” he said. “It’s a good image.

“I want to hand it to him personally, that is what my dream is,” Krasky said.

The as yet unfinished painting shows Gibbons with the Nevada state flag as a backdrop. 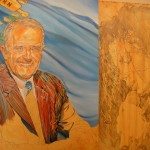 Krasky, 40, was laid off from his job as a federal agency security officer in late 2008 and only took up a paintbrush a little over a year ago after spending years doing sketches. Since that time, he has produced about 50 works, including sketches, and has received some favorable attention for his efforts.

He has painted film director James Cameron and the late performer Michael Jackson in combination with the Cirque Du Soleil cast, among others.

The former Russian left his native country in 1997, traveling through several Latin American countries, sometimes illegally, before finally arriving in the U.S. and becoming a legal resident.

His 36-inch by 48-inch portrait of Gibbons is not in the traditional style but more of a commercial approach, Krasky said. He expects to finish it in a few more weeks.

Gibbons earlier this month picked a Washington state artist to paint his official portrait for the $20,000 commission. Forty-four applications were received.

Jill Lufrano, a spokeswoman for Gibbons, called Krasky’s art “amazing” after seeing it on YouTube.

“Unfortunately only one artist was able to be selected for the official portrait,” she said. “But I’m sure Gov. Gibbons would be delighted to have Alex give him the portrait. It would be an honor for the governor to have it in his collection.”

Krasky said his wife suggested he try painting in oils after seeing his sketches. An art teacher he went to for lessons said his technique was fine and there was nothing she could show him. After being less than impressed by a second teacher, Krasky went forward on his own.

Krasky said he has not tried to sell his work but he has received media interest, including a report last year about his Michael Jackson work by ABC Channel 13 Action News.

“It is my passion,” he said. “The problem is I’m not noticed. I’m just working at home without showing it to anybody.”

Krasky’s works, including the Gibbons work-in-progress, can be viewed on a YouTube video.

Alex Krasky says he will finish his Gibbons portrait even those he was not selected as the finalist:

Krasky says he decided to start painting about a year ago and is self-taught:

Krasky says he paints for pleasure: