Opinion: How to build a corporate state using a simple yield curve

In a strange twist of fate, I’ve begun to cheer for the Democrats. My thinking is that the faster they build their progressive utopia, the sooner rational people will see it for the Orwellian nightmare that it is. Many Republicans believe this is already happening, and all will be well in November. I believe it will take longer, mainly because the Republicans seem to be helping them.

Just to make sure we’re all starting on the same page, here’s a quick and easy explanation of the yield curve. 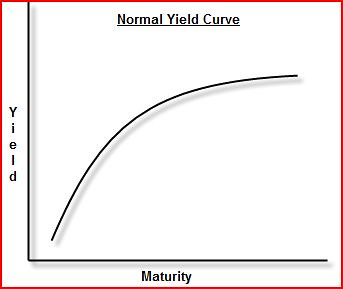 The maturity on the bottom is the time element. The yield is the promised return on the investment. The longer the time, the greater the risk, and therefore, the higher the return. You don’t need to calculate the yield to understand the curve. I told you it was easy.

There’s a terrific animated chart on stockcharts.com that compares the yield curve on government bonds with the S&P 500. The last 8 years provide a good demonstration of the yield curve’s importance. I can’t bring the animation here, but the site encourages people to take screenshots. And, now that I’ve successfully navigated the Microsoft labyrinth and found the magic snipping tool, we can look at some.

We start our latest round of corporate-nation building in mid July of 2002. On the left, the black line is the yield curve, and the gray areas show the movement and velocity. At this time, the yield curve is in near perfect formation. The chart on the right is the S&P 500. We can see that in 2002, the S&P was just bumping along in no particular direction. Short term investors were having a hard time outguessing which way it would go, and long term investors weren’t making anything. Nobody was happy. Stability breeds boredom.

June of 2003: In an effort to get things moving, the Federal Reserve steps in and lowers short term interest rates (dropping the yield). This causes investors to move their money from treasury bills and other short term bonds into the stock market. The S&P hits new highs, and the rally is on. Long term rates remain the same to help home buyers. This move was wildly applauded by nearly everyone at the time.

November of 2005: With the rally sustained, the Fed raises short term interest rates. They do this to prevent what Alan Greenspan once dubbed “irrational exuberance”. Having started the rally, they now try to dampen the enthusiasm for it. On the S&P chart, notice the stair step nature of the upward momentum, with double and triple peaks followed by minor sell-offs. Each incremental increase in rates by the Fed causes a few investors to exit the stock market. A general upward trend continues as Keynes’ “animal spirits” are still in the majority.

March of 2006: The first sign of trouble, the yield curve turns flat. It’s generally considered to be a precursor of an economic transition. Still, it’s only one negative sign in a field of positives. The rally continues.

June of 2006: An ominous sign. The yield curve is now inverted with short term yields paying more than longer term yields. The previous 6 recessions were preceded by an inverted yield curve. “Not to worry”, say the talking heads, “we’ve had inversions without recessions, and recessions without inversions before. 6 straight doesn’t necessarily mean there will be a 7th.” They’re right, of course, it doesn’t. In fact, the longer a trend is, the less likely it will continue.

November of 2006: The yield curve flattens and inverts again. This time, it’s more pronounced and unmistakable. Talk in the press of an impending recession becomes more numerous. The “doom and gloom” forecasters are largely ignored.

November of 2007: The S&P 500 is at the tail end of a major double peak formation, suggesting the years-long rally has lost its momentum. The Fed begins lowering interest rates to keep the rally going, or at the very least, produce a “soft landing.” With short term yields still relatively high, the smart money exits the stock market.

August of 2008: The Bush stimulus in the spring helps with a small upward spike, but the major sell-off continues. Worst of all, as we now know, is many company’s borrowed heavily on the way up. With prices falling and investors becoming scarce, they are now strapped for cash. As the old saying goes, “Adventure is the result of bad planning.” But dude, check out that good lookin’ yield curve!

December of 2008: This is what a panic looks like. It’s hard to say who’s having the greater adventure here, corporate officers, stock market investors or Federal Reserve officials. Interest rates hit zero, and $400 dollars invested in a 3 month Treasury Bill now brings a profit of 1 cent. Even that won’t get money back into the stock market.

March of 2010: The S&P 500 hits bottom. The stimulus plan was passed in February and together with the government’s buying of millions of shares of stock, we have a new meaning to the term “corporate welfare.” We might also note that with interest rates at zero, an inverted yield curve is impossible. A flat curve, while theoretically possible, isn’t very likely. As a predictive tool, the yield curve is now a meaningless relic. Government manipulation of interest rates is over, for the time being.

June of 2010: So, here we are today, with the S&P a couple of hundred points above where we started and heading down.

On the political left, there are calls for another round of stimulus and government buying of private debt. This has the unhealthy side effects of ever more federal debt and government ownership of for-profit industry (corporatism). I can’t be the only one who noticed that the last round of stimulus did wonders for the stock market while doing nothing for the unemployed; and this from the Party of the Common Man.

On the right are the inevitable calls for tax cuts to “promote growth.” Aggregate debt for the S&P alone is over $2.5 Trillion. Are there enough taxes to cut to make up for that much? I don’t know, but forget the scissors, better fire up the chainsaw.

All across the political spectrum is a small but growing minority that wants to dump the Federal Reserve altogether. While this won’t solve the current dilemma, it might prevent another one. After all, it only took 8 years from the Fed’s creation (1913) to the first recession (1921), and 16 years to the first crash (1929). Their record since has been marginally better, but remember, they’re supposed to be maintaining stability.

Historically, the stock market is pretty quiet through the summer, and if there is to be another plunge, it would happen in October. Second quarter earnings reports will be released over the next few weeks. We will soon know whether we will have a quiet summer, or an adventurous one; a work stoppage, or more building.