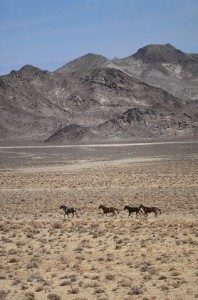 The Bureau of Land Management (BLM) has postponed daily gather operations in the Little Humboldt and Rock Creek Herd Management Areas (HMA) to conduct aerial reconnaissance of the HMAs to document and map the locations of the remaining excess wild horses inside and outside the HMAs.

The gather will resume after new areas have been identified where temporary corrals can be located nearest to the animals as possible so they may be safely gathered. The BLM estimates approximately 425 excess wild horses have moved outside the Rock Creek HMA, and are causing considerable impacts to rangeland resources on public and adjacent private lands, as well as impacting habitat for the Lahontan cutthroat trout.  A second group of approximately 150 excess wild horses have been sighted in the Rock Creek HMA.

All the wild horses shipped to the Gunnison Prison Wild Horse Training Facility at the Central Utah Correctional Facility and the Palomino Valley Center near Sparks, Nev. during the past week are stable, and receiving good feed, water and veterinarian care if needed.

During the next several months the animals will be wormed, vaccinated, and freeze marked, and all 12 month and older studs will be gelded.  Once the wild horses have fully recovered, they will be made available for adoption to qualified applicants through the BLM’s Adopt-A-Wild Horse or Burro Program.  The public may visit the BLM’s website at www.blm.gov for more information about adopting a wild horse or burro.

Three members of the public were present Sunday to observe the fertility application process. The observers also had the opportunity to watch, film and photograph the mares being released back into the Little Humboldt HMA.

As more information becomes available it will be posted at the website:  http://www.blm.gov/nv/st/en/fo/elko_field_office.html.  For further comments and questions, the public may call 1-866-468-7826.

The BLM manages more land – more than 245 million acres – than any other Federal agency.  This land, known as the National System of Public Lands, is primarily located in 12 Western states, including Alaska.  The Bureau, with a budget of about $1 billion, also administers 700 million acres of sub-surface mineral estate throughout the nation.  The BLM’s multiple-use mission is to sustain the health and productivity of the public lands for the use and enjoyment of present and future generations.  The Bureau accomplishes this by managing such activities as outdoor recreation, livestock grazing, mineral development, and energy production, and by conserving natural, historical, cultural, and other resources on public lands.