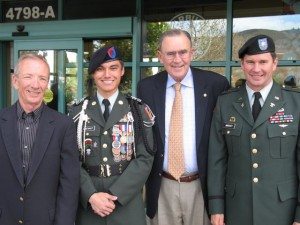 When Ken Whan, manager at the Starbucks in Caughlin Ranch decided to send Via instant coffee to a unit of Army soldiers and Navy SEALs in Afghanistan, he thought adding a note in each box of coffee would be a nice touch. Students at Caughlin Ranch Elementary school agreed and two classes of second graders wrote notes of encouragement to the soldiers. “Each child wrote a letter to a soldier and drew a lovely picture and attached them to the Via Coffees to help inspire them and thank them for what they do for us,” said Lisa Garcia, a second grade teacher at Caughlin Ranch Elementary school.

The soldiers liked the coffee and the notes so much, they asked for more to share with their fellow soldiers, so Ken and his customers sent more coffee and the students wrote more notes. “They knew they were doing something nice for someone who was so far away from home,” said Garcia. “Please be safe…”, “We can’t wait for you to come home..”, “Nevada loves you…” are words the kids wrote.

Friday morning at the Caughlin Ranch Starbucks, Ken thanked the students and presented their teachers with a an American flag that had been flown in Afghanistan. The Reno High Jr. ROTC color guard presented the colors during the brief ceremony. Ty Cobb, who represents the Secretary of the Army in Northern Nevada said a few words and then Ken offered hot chocolate and snacks to all the kids. 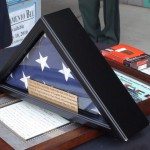 Ken Whan chose Memorial day weekend to hold the ceremony at his Starbucks to “…honor the troops overseas and veterans, to honor what they’ve given us – and that’s freedom.” He read a note from the unit that said in part: “… your cards and hundreds of boxes of Via coffee made their way to the Army forces and Navy SEALs in Afghanistan during the late fall of 2009. The cards from all the supporters and especially the notes and pictures from the children touched so many. I wish I could list all the names and say thank you…” A great story about neighbors working together to send a little cheer. Looks like it worked.