Highway 93 brings adventure back to summer 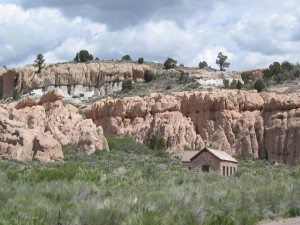 An old cabin located in Spring Valley State Park. Built by pioneer George Moody in the 1870s, the cabin was restored in the early 1990s by Nevada State Parks. The cliffs in the background are composed of ash-flow tuff (buff layers) and bedded volcanic ash (white layer). The cabin was constructed using blocks of the ash-flow tuff quarried nearby. Photo by Jon Price.

Joshua trees, roadrunners, and Hualapai Mountain Park are just a few sights that Highway 93 tourists can find this summer using the new guidebook published by the Nevada Bureau of Mines and Geology at the University of Nevada, Reno.

Anyone from an experienced geologist, a budding naturalist, or someone who just wants to see the sights can use the newest guidebook to travel along Highway 93 on Nevada’s east side traveling north from Wickenburg, Ariz. and ending in Jackpot, Nev.

The guidebook, titled A Geologic and Natural History Tour through Nevada and Arizona along U.S. Highway 93, with GPS Coordinates describes interesting points of geology, animal and plant life, natural history and cultural history. It’s the fourth in a series of guidebooks the Bureau has published. Others include U.S. Highway 50 and half-day tours in the Las Vegas and Reno areas.

“The book is great from my perspective,” Jon Price, State Geologist and Bureau director said. “It’s geared for the general public, not the typical geologist or engineer for whom most of the Nevada Bureau of Mines and Geology maps and publications are prepared. It’s written for people driving along the route. The route goes through some fascinating geological exposures and goes into and out of the Great Basin.”

The book covers almost 700 miles of Highway 93, and the route can be covered in three or four days, or longer for those who want to slow down and smell the sagebrush. There are 17 towns along the route that have various accommodations, historical sights and places to refuel and refresh. For the most part, however, the highway tour travels through isolated and unpopulated areas, so it is best to bring plenty of food and water.

“We have grand ideas for future books in this series such as U.S. Highway 95, U.S. Highway 6, and Interstate 80,” Price said. “We hope to integrate the books into new technologies, such as applications on cellular telephones with GPS.”

There are currently 3,000 printed copies of the spiral-bound easy-to-use guide book. It was published by the NBMG in partnership with the Arizona Geological Survey and is priced at $27.95.More information about the book and how to buy one can be found at www.nbmg.unr.edu.