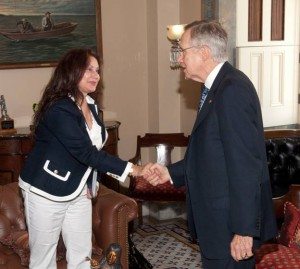 WASHINGTON, D.C.—Sen. Harry Reid met today with Bridgette Denison, mother of Brianna Denison, a Reno woman who was raped and murdered in 2008. DNA that was discovered in the investigation implicated a suspect who was later found guilty and has been sentenced to death.

Denison and Reid spoke about the Katie Sepich Enhanced DNA Collection Act of 2010, which increases Byrne grants for states that implement DNA collection programs for people who are arrested for the commission of a violent crime.

Denison is lobbying the state legislature for a bill that would require DNA collection for suspects arrested for violent felonies in order to make Nevada eligible for the increased Byrne funding.

“What happened to Brianna Denison was an absolute tragedy,” said Reid. “I believe we must do more to capture DNA samples from criminals, and I respect her mother’s efforts to honor her daughter’s memory by advocating for law enforcement funding that will save lives by identifying violent offenders earlier through DNA cataloging. I encourage the state Legislature to pass a bill in their next session that will enable Nevada law enforcement to collect samples from violent offenders, so we don’t have to lose another bright, young Nevadan like Brianna.”