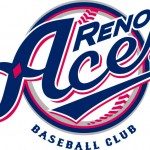 Doug Deeds continued his torrid hitting pace with a home run and his league-leading 25th double, but the Aces fell 8-5 to Salt Lake in the series-opener Thursday night at Aces Ballpark.

The Aces took an early 1-0 lead, but Salt Lake answered with three in the second and one more in the third to take a 4-1 lead. Reno would fight back, with Deeds belting a solo home run to lead off the third. Jeff Bailey and Brandon Allen would hit back-to-back doubles later in the inning to cut the lead to 4-3.

After the Bees plated one run in the fourth, the Aces would fight back again with two more runs, as Cole Gillespie and Miguel Montero recorded RBI hits in the frame to tie the score at five. But Salt Lake would answer with three runs in the fifth to make the score 8-5, which is where it would end up, as the bullpens were masterful the rest of the way.

Matt Torra (3-4) suffered the loss for Reno, after allowing eight runs in 4.1 innings of work. Luis Ayala, Jordan Norberto and T.J. Beam combined to hold the Bees scoreless over the final 4.2 innings to keep the Aces in the game.

Marco Albano (2-6) earned the win for the Bees in relief of starter Daniel Davidson, who went the first four innings and gave up all five Reno runs. Michael Kohn picked up his third save in as many chances, recording the final six outs for Salt Lake.

Deeds (2-for-4) and Bailey (3-for-5) led the Aces offensively, while Gillespie chipped in with two hits and an RBI as well. After a leadoff single in the fifth, however, the Aces were held hitless the rest of the way.

The Aces and Salt Lake play the second game of this four-game set Friday night. Reno will send RHP Wes Roemer (1-1, 5.18 ERA) to the mound against RHP Fernando Rodriguez (0-1, 7.40). First pitch is set for 7:05 p.m., and is another Saint Mary’s Fireworks Friday presented by KOLO 8. It is also Military Night presented by Bank of America, with a jersey auction after the game to benefit the Sergeants Major Fund.