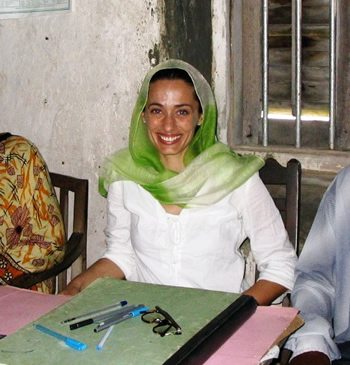 University of Nevada, Reno Assistant Professor Erin Stiles was one of eight people recently honored with the Eleanor Roosevelt Global Citizenship Award by the Center for Public Anthropology. This is the first time a professor from the state has been honored with this prestigious award, which seeks to highlight teachers who emphasize civic engagement in introductory anthropology courses.

Stiles was chosen not only because she successfully got her students engaged in the Public Anthropology’s Community Action Online Web site, where students write opinions on a current issue that involves anthropology, but also because of the example she sets for her students.

“She acts as a role model, for educators to move beyond talking about improving the world around us to taking concrete steps toward doing so,” said Rob Borofsky, director of the Center for Public Anthropology.

Stiles’ recent research in Tanzania focused on how the court system treated marital disputes. She continues to study how lay people and professionals understand, interpret and use Islamic legal ideas, and was recently awarded a Fulbright scholarship to conduct a similar study in Ethiopia.

“Given the present problems faced in the Middle East and around the world, Dr. Stiles’ doctoral research has particular relevance.” Borofsky said.

Stiles teaches Introduction to Cultural Anthropology, and her goal is to show her students the diversity of cultures around the world and to think critically about what they consider to be “normal.”

“I try to get them to look beyond their own cultural conditioning,” she said.

Stiles’ students, about 100 of them each semester, wrote essays and submitted them online to the Public Anthropology Community Action Web site to be read by their peers, about 2,000 other students participating across the country. Many of her students won awards for the essays they submitted, a testament to their enthusiasm for the project, and Stiles’ ability to truly engage her students.

“I am particularly pleased that Erin Stiles was honored with this important national award,” said Heather Hardy, dean of the University’s College of Liberal Arts. “It underscores the value the college places on civic engagement and the cultivation of engagement in our students.”