Reno rallies for 4-2 victory over Omaha 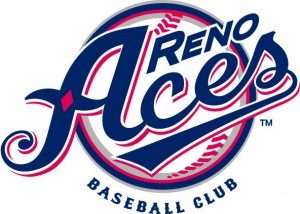 Four-straight eighth inning singles for Reno unlocked a 2-2 tie and vaulted the Aces to a 4-2 victory over the Omaha Royals Wednesday afternoon at Aces Ballpark.

With the game tied at 2-2 and two Omaha runners on in the top of the eighth inning, Reno reliever Jordan Norberto came out of the bullpen and put out the fire, preserving the tie game. That effort would set the stage for the Reno offense to draw blood in the home half of the frame. Consecutive singles by Gerardo Parra, Ryan Roberts, Ed Rogers and Yunesky Sanchez would put the Aces ahead 4-2, a lead they would not relinquish.

Norberto (2-0) earned the victory, after finishing the final 1.2 frames in scoreless fashion. Aces starter Billy Buckner took a no decision, but was once again effective on Wednesday, scattering three hits and two unearned runs over 7.1 innings of work.

The loss fell to Luis Mendoza (0-2), who surrendered the go-ahead runs in the eighth inning. O-Royals starter Bryan Bullington took a hard-luck no decision, allowing just two runs on seven hits over seven innings of work.

At the dish for Reno, Parra and Roberts led the way with three hits and an RBI apiece. The Aces out-hit Omaha 11-3 on the day.

The series continues Thursday night at Aces Ballpark. Reno will trot-out RHP Kevin Mulvey (0-2, 4.15 ERA), and Omaha is set to counter with RHP Anthony Lerew (1-2, 2.90). First pitch is set for 6:05 p.m. PT and the game will be another Coors Light Thirsty Thursday™.