Opinion: Why agriculture, why now

Part 6 in an ongoing series about the University of Nevada, Reno budget cuts 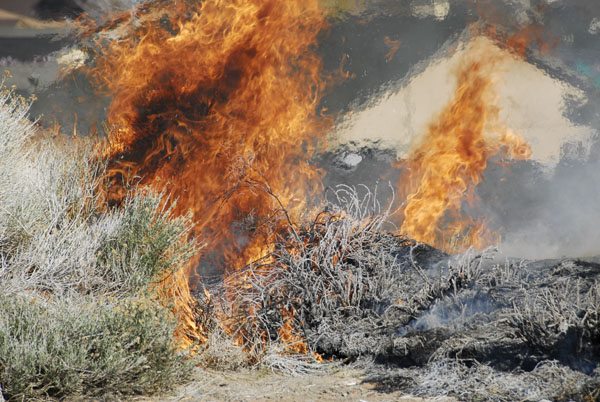 If there was ever a landscape in a state of ecological crisis, the Great Basin is it. Comprising 135 million acres, most under government management, the Great Basin is rapidly becoming a denuded rangeland. The impacts of the loss of productivity – productivity affecting wildlife, plant biodiversity, recreation opportunities, agricultural production and livestock grazing – reach close to home.

Wildfires in particular have helped convert the Great Basin, once a richly diverse forage base, into monocultures of invasive plant species, cheatgrass in particular. Cheatgrass-enabled fires have regularly interrupted urban living, and the notion that the Great Basin’s problems are remote and rural is belied by our nearby hills yellowed by the weed each summer.

Cheatgrass is compared with gas in terms of flammability, and skies polluted by wildfires are a visible affront to the senses. Taxpayers further feel the impact when state and federal resources are taxed in an ever-behind-the-curve approach to land management – the constant and costly putting out of fires rather than preemptive efforts to help minimize fire impacts prior to ignition.

Scientists, who have decades of direct knowledge of the Great Basin’s wildlife, economics, grazing histories and landscape changes, made recommendations in 2008 about the state of this crisis. The message was clear: In addition to increased investments in rangeland revegetation and rehabilitation – including suitable non-native plant species shown to benefit these denuded lands – education, research and development were noted as being critical to aid environments frequently described as being beyond the point of large-scale help.

With land management agencies facing a glut of retirements, it follows that qualified professionals need to be trained in matters pertaining to the Great Basin ecology in order to best serve these environmental interests.

So it came as a shock that University of Nevada, Reno administrators targeted the one college poised to address this ecological crisis by taxing it with 42 percent of the University’s budget hole and the elimination of the very programs that can help train these professionals.

The University Provost, Marc Johnson, has yet to provide an answer – at least one that makes sense – as to why the College of Agriculture, Biotechnology, and Natural Resources (CABNR) was singled out in its curricular review process, a process designed to enhance the University’s curriculum but that is instead being used to eliminate certain faculty and programs to reach budget cutting goals.

Recent acknowledgments that the University reached a compromise with the state’s agricultural constituents to keep CABNR intact, but with reduced programmatic offerings, at best illustrates a two-steps-backward, one-step-forward outcome from negotiations.

There are at least three possible explanations why CABNR is proposed to take the greatest hit of all campus units. All three are plausible and a combination of each is most likely.

1. The first reason is to directly target the constituents who likely side with the state’s anti-tax agenda, as if to show directly what the consequence of this ideological stance means in reality. Bring the issue to the forefront of their senses, and the state’s ranchers and farmers – typically an anti-government crowd – are sent a clear message as to what reduced government funding can mean.

Why this rationale is not far off base is because one legislator used this exact strategy during the 2010 special session of the legislature to attempt to eliminate one entire sector of government in order to send a message to the people of the state. Budget cuts are being framed as the consequence for refusing to raise taxes.

2. The second reason, cited more than once by the powers that be, is administrative bloat. Provost Johnson went in front of the Legislature’s Interim Finance Committee and said that CABNR’s administration is among the most costly administrations on campus. Always one for inventing context where it’s convenient, the Provost ignores that even a cursory viewing of state-supported budgets on campus shows CABNR’s budget is dwarfed by Health Sciences, Engineering, Science, Liberal Arts and even the Provost’s own budget. Adding in Experiment Station funds puts CABNR/NAES well under the School of Medicine, the Vice President for Administration and Finance and the Vice President for Information Technology.

More to the point, how does the CABNR/NAES administration compare nationally? Historically, these units had significant resources, including a communications department, to satisfy federal and state mandates requiring significant outreach to beneficiaries of agricultural research and education – the state’s ag producers and land managers.

These efforts diminished radically over time to the point that when CABNR/NAES and Extension communicators would show up at international conferences for the Association for Communications Excellence, the organization for extension and experiment station communicators, other states, even those with similar levels of agricultural productivity to Nevada, are amazed at Nevada’s lack of able participation.

This was most pronounced in 2004 when ACE asked Nevada to host its annual conference and we had to hire an outside meeting planner to handle the arrangements, as there were simply not enough bodies to do what was necessary for such a conference, whereas most other states can aptly handle the annual conference with the available support from experiment station and extension personnel.

Most states have rich agricultural support from their land grant institutions; Nevada’s agricultural capacity, on the other hand, is framed as bloated and ripe for picking despite what history and comparison with other states show.

3. The final possible reason for using CABNR to solve a disproportionate bulk of the University’s budget crisis is an institutional sense of shame for an enterprise on which land-grant institutions were founded. What’s notable about the University’s most recent strategic plan is the absence of agriculture. The document is ripe, however, with plans to transform UNR into the University of the New Green, where green technologies, sustainability and renewable energy will be at the forefront of research, outreach and education.

News sent and posted by UNR over the past few years has followed this same green motif. A search for “agriculture” since 8/1/06 on Nevada News yields 108 results. Searches for environment and environmental yield 413 and 254, respectively. Digging into the results, we find that, as much as possible, ag news is frequently framed as environmental news.

Why? With agriculture comes uncomfortable realities, such as the existence of a slaughterhouse at Main Station or, more troubling, using animals for research, not minding that the School of Medicine and the Department of Biology do the same.

We are so removed from where and how we get our food, and what that entails, as well as from the whys behind the research conducted to enhance both human and animal health, that the University has chosen to emphasize the obvious over what it perceives as the anachronism of agriculture. It has become saturated with the “go green” mentality; allegedly the Provost, in negotiations with CABNR and its constituents, wanted the resources economics program to be renamed environmental and resources economics rather than the proposed agricultural and resource economics. Couple that with urban constituents and donors, many of whom are transplants from the western state next door, and the University’s rebranding itself as a green institution means that, ideologically speaking, something has to give.

But what being green in the Great Basin truly means is invoking the power, history, knowledge and on-the-ground experience of the state’s agricultural roots to treat the landscape holistically. Nevada’s best ranchers are environmentalists at heart – despite many bristling at the e-word – and the state has a disproportionate share of excellent land stewards.

The University’s curricular review / budget cutting process, therefore, is an ultimate contraindication. In a state dominated by federal lands in peril, it is up those who actually toil on the lands to be active participants in attaining what the University claims it ultimately wants to achieve: a sustainable environment.

If anything, that is the message the University should be selling; in addition, the University and its Regents should be striving to preserve what support is left at UNR for agriculture in Nevada. Ultimately, the state’s environment depends on it.