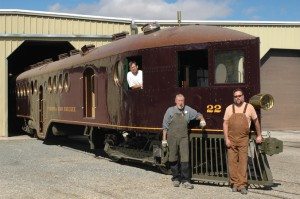 Members of the restoration team with the fully restored McKeen Motor Car at the Nevada State Railroad Museum, Carson City.

Carson City, Nev.  The Nevada State Railroad Museum in Carson City will celebrate the delivery of the historic McKeen Motor Car V&T No. 22 marking the completion of its decade-long restoration and the Hundredth year anniversary of its arrival in Carson City. After a public ceremony and inaugural trip, rides will be available to the public.

The dedicated team at the Nevada State Railroad Museum completed a decade-long labor of love and study in railroad history with the restoration of the McKeen Motor Car, V&T No. 22. A celebration of the momentous occasion will be held May 9, 2010, coinciding with the arrival of the car in Carson City exactly 100-years-ago to the date.

When the McKeen runs again on May 9, 2010 it will be the first time the car has been in passenger service since it was decommissioned from the Virginia & Truckee Railway in 1945. The Nevada State Railroad Museum, Carson City has the only surviving, restored and operational McKeen Motor Car in the world.

The History of the McKeen Motor Car, V&T No. 22

William Riley McKeen Jr. (1869-1946), the former superintendent of motive power for the Union Pacific, began producing motorcars in 1904 to answer the need for low-cost operation on low-revenue lines. Inspired by new high-speed torpedo boats powered with internal-combustion engines, McKeen’s cars represent the first practical application of the internal combustion engine to rail service. McKeen built just over 150 motorcars. The Virginia & Truckee paid $22,000 for the 70-foot motorcar, which arrived under its own power in Carson City from Omaha, Neb. on May 9, 1910.

When the car last ran in revenue service, on October 31, 1945, it was believed to be the only McKeen motorcar still powered with its original engine. Even so, the car already had been modified from its original configuration, with most of its passenger spaces converted to Railway Post Office and express compartments in 1932.

The Nevada State Railroad Museum, Carson City began restoration of the McKeen Motor Car in 1998. The restoration team found the remains of the car devoid of its trucks, power plant and air and fuel tanks. When it was donated to the museum, it was discovered the car body was modified further to conform to the needs of its successive uses as a diner, lounge, pottery shop and plumbing supply store.

“Enough of the body remained to justify a thorough rehabilitation,” said Chris DeWitt, Restoration Supervisor. “So much was missing, that restoring it to its as-built appearance was no more difficult than any other option.”

Rebuilding the car involved the replacement of much of the body framing and sheet metal below the window line. One bulkhead, and several roof panels, where vents had been added or doorways raised, were also replaced. The floor, composed of sheet steel, sound-deadening material and maple, is entirely new. More than five thousand rivets were replaced.

To save weight, McKeen used aluminum castings wherever possible. Of the 33 aluminum-framed porthole windows, 19 are original. Although McKeen plated the castings with brass, the aluminum pieces for the restored car are powder coated. The top-hinged portholes are held open with ceiling-mounted hooks. A few of the original sprung hooks remained to serve as patterns for replacements.

Originally, the interior of the car was illuminated with acetylene lamps. This system was converted to electricity in 1923, and, other than the acetylene pressure-gauge mounted beneath the car, all lighting components had disappeared by the time the car was acquired. Fortuitously, two of the original lamps were found and donated. These provided an authentic pattern for aluminum replicas. The brass headlamp is a replica.

No examples remain of the car’s seats. Although no photographs of the original interior of this car are known, images of other cars reveal that McKeen used a wide variety of seats, apparently obtained from various suppliers. The museum furnished the car with newly manufactured seats appropriate to the era. Two replica dry hoppers were made for the salons. One of the original mirror frames was located.

Since no McKeen engine could be found, a modern diesel engine is utilized. Like the original, it is mounted on the front truck. To recreate the outward appearance of the car with its McKeen engine, a faux flywheel is mounted on the right-hand side of the truck. Both trucks were replicated at the museum, based on specifications, drawings and photographs of the originals. Although originally driven through a gear transmission and chain drive, the 42-inch driver of the rehabilitated car is driven hydraulically. Brake components and sundry parts were obtained from one of only two other McKeen cars known to exist.

The unusual rear coupler, provided for pulling a light trailer, was found in place beneath the car. It provided samples of the original green paint used on the car’s undercarriage. A piece of sheet metal at the nose, crumpled in an early grade-crossing accident and covered with a patch for nearly a century, preserved the body’s original maroon color. Likewise, examples of the original brown roof color were found under layers of paint. The interior walls are paneled in new mahogany veneer and board wainscoting, while the original headliner was restored.

The original air whistle, found in the car’s engine room, has been restored to its proper place. The bell of the gong is new, but the crank and clappers are original. The patent plate was still in place on the car when donated, and the original builder’s plate was acquired from a collector.

According to Peter Barton, acting administrator of the Division of Museums & History, “Virginia & Truckee motorcar No. 22 bears witness to the innovative endeavors of William R. McKeen, Jr. The restored car is an operating monument to donors Al and Lenore Bernhard, to the dedicated museum staff and to the volunteers who contributed labor. It also testifies to the vision and commitment of the Nevada legislature and nearly one hundred individual donors who contributed to the estimated one-million-dollar cost of the project. It is the goal of all involved that the car will provide satisfaction and pleasure to many future generations of Virginia & Truckee fans and visitors to the Nevada State Railroad Museum.”

The Nevada State Railroad Museum is located on Route 395 at the south end of Carson City at the intersection of Fairview Avenue.  A yellow train station and red water tank at the entrance to the museum grounds are landmarks.  For more information, please call 775-687-6953. It is one of seven museums of the Nevada Department of Cultural Affairs.  The Department serves Nevada’s citizens and visitors through cultural and information management, presentation and promotion of cultural resources, and education. The Department also includes the State Historic Preservation Office, Nevada State Library and Archives and the Nevada Arts Council.  For more information, please call Teresa Moiola at (775) 687-8323 or visit the department’s website at www.NevadaCulture.org.