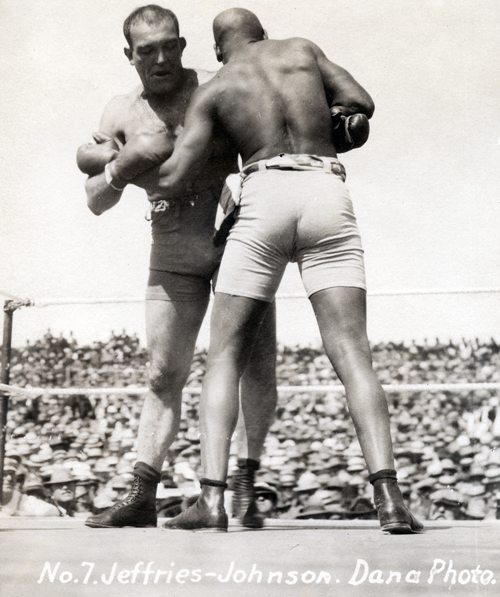 Lecture by Guy Rocha at the Nevada Historical Society

The Nevada Historical Society will host a free lecture by former State Archivist Guy Rocha as he presents the program “Long Forgotten, Later Found: The Johnson-Jefferies Fight Site.” The presentation will be held May 22 at 1:00 pm in the society’s Reno History Gallery.

On July 4, 1910, Reno staged perhaps the most controversial boxing contest in American history.  The outspoken, reigning heavyweight champion Jack Johnson, the first African-American to hold the prized crown, overwhelmed his opponent Jim Jefferies, an undefeated heavyweight champion who had been coaxed out of retirement and dubbed “The Great White Hope.”

On July 4, 1979, the Washoe County Historical Society and the Nevada Corral of the Westerners International dedicated a historical marker commemorating the Johnson-Jefferies fight on the southeast corner of Toano and East Fourth streets.  However, the exact location of the arena site, obscured with the passage of time and the growth of Reno, had been difficult to find.

According to Rocha, “Old-timers knew it was out East Fourth Street, somewhere between Spokane and Sage streets, yet nobody knew for sure just where.  A dedicated group of historians and history buffs decided in January 1979 that it was high time to solve the mystery.”

In his presentation Rocha will detail how a group of history detectives, including himself, set about locating the exact location of the bout. He will reveal that found location as part of the program.

“Today, thanks to a cadre of history detectives, there is now a marker to designate the site where, for a time in 1910, much of the world’s attention was focused on two boxers, one black and one white, who represented much more than themselves in a perceived test of racial superiority,” said Rocha.

This program accompanies the exhibit “Johnson-Jeffries Fight: A Centennial Exhibition” a one-of-a-kind exhibit expressed through art, photography and ephemera in the Historical Society’s Hallway Gallery. The exhibit will run through July 30, 2010.

The Nevada Historical Society, located at 1650 N. Virginia Street on the UNR campus, was founded in 1904 and is the oldest state museum. Programs include an active exhibition schedule, public programs and docent-guided tours. The Historical Society’s Research Library, with its extensive collection of Nevada information and photographs, is open to the public from noon to 4 p.m., Wednesday through Saturday.  The exhibit galleries and museum store are open from 10 a.m. to 5 p.m., Wednesday through Saturday. Admission is $4 for adults ages 17 and over, children and members are free.