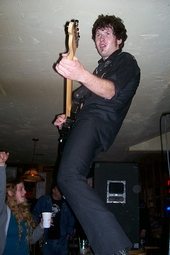 Extradition Music announced today that the popular Honky Tonk Hangover music series has been revived again for a new run of shows. For the third consecutive summer, Leroy Virgil, one of Reno’s most authentic country musicians, will be bringing his unique blend of music and storytelling to the Sierra Tap House.

All shows are free and Sierra Tap House will be offering drink specials each night of the series. Leroy Virgil is best known for his work with Outlaw Country band Hellbound Glory and the group Leroy Virgil and the Loaded Dice, which plays classic country covers.

Extradition Music is not a style or a sound. It is about a place, a place that has a long lineage in the annals of Outlaw Country, Alt-Country, Americana and Roots Rock music. Reno has been the home of the fictitious crimes as sung by Johnny Cash and Woody Guthrie; the rambling of Tom Waits, The Grateful Dead and Merle Haggard; and the home of acts like Hellbound Glory, The Saddle Tramps and Richmond Fontaine. Reno is where their characters run to when they want to break the law, and run from when the deeds are done. Extradition Music aims to bring this cast of bad men, led by the great Johnny Cash himself, back to Reno to face the music.