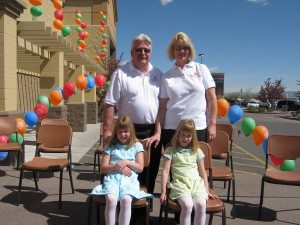 Renown Children’s Hospital and Renown Children’s Miracle Network (CNN) are proud to announce the 2010 Nevada Champions presented by Walmart and Sam’s Club. Seven-year-old twins, Katy and Paige DuPriest were selected by CMN as ambassadors for the state.

In their new role, the girls, along with their parents Lori and Rob, and sisters Brooke and Alexis, will raise awareness for CMN through a variety of local and national events and fundraisers. As the CMN Champions, Katy and Paige will travel with their family to Washington D.C. this June 5-10, where they will be recognized by government officials for not only overcoming their illnesses, but also for their help to promote CMN. The twins will also be recognized in a formal ceremony Nov. 10-14 at Walt Disney World Resort in Orlando, Fla.

According to Children’s Miracle Network National, the Champions program is a testament to the importance of children’s hospitals. Each Champion represents countless other children who have faced severe medical challenges and received care and treatment at the best hospitals in the country.

Katy and Paige DuPriest were born premature at 28 weeks, due to twin-to-twin transfusion syndrome (a complication of disproportionate blood supply where two or more fetuses share a chorion and hence a singleplacenta). As a result, both girls endured a variety of complications after birth.

At birth Katy weighted one pound 15 ounces and was immediately placed on a ventilator. At two weeks of age, she had a titanium clip put in her chest to close the valve in her heart. A week later, she developed pulmonic stenosis, a valvular heart disease in which outflow of blood from the right ventricle of the heart is obstructed at the level of the pulmonic valve. She also had a grade three brain bleed and was facing cerebral palsy, which within weeks, resolved on its own. Katy was flown to Lucille Packard Hospital at Stanford University, facing open-heart surgery but had angioplasty instead. The angioplasty made her pulmonic stenosis better, but it didn’t resolve completely. To this day she still has the back flow in her heart, however, she does not need any medication. Katy continues to be monitored by a cardiologist every three years.

After the angioplasty, Katy was transported back to Renown Children’s Hospital. She was still on the ventilator and was at Renown for three months because of infections and eating problems due to reflux. It took more than a year for Katy to completely recover.

Paige was born two minutes after Katy and weighed one pound, four ounces. She was on a ventilator much longer than Katy and was on oxygen at home for nine months. While at Renown, Paige did not have the stamina to complete her feedings, therefore she was not gaining the necessary weight. Like her sister Katy, Paige also had several infections while she was in the hospital. She also had five ear surgeries as a result of her inner ear not allowing enough room for sound to vibrate off the eardrum because she was so small. As a result, Paige had tubes in her ear for the first four years of her life. Because there was so much damage, they did not complete reconstruction on her left ear until she was 5-years-old.

In spite of the many holes in her eardrum and the thin tissue, Paige’s reconstructive ear surgery was a success. Today, she still follows up with an Otolaryngologist each year and continues to progress nicely. According to her parents, she seems to be outgrowing the problems with her ear.

Today, Katy and Paige are healthy 7-year-old girls. They are in the first grade, full of energy and curiosity.