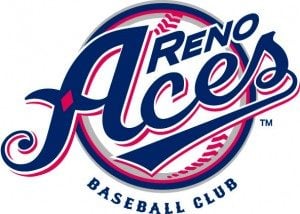 The Reno Aces jumped ahead 8-0 after two innings and coasted to a series-clinching 12-2 victory behind a huge offensive effort from Ryan Roberts Thursday night at Aces Ballpark.

The Aces used a three-run first and a five-run second inning on the way to their first series victory of the season. Jeff Bailey got the Aces started with a two-run double in the first, and Roberts knocked in his first of four RBIs on the evening to give Reno a 3-0 lead they would not relinquish. Chris Rahl added a two-run single in the second, ML-rehabber Conor Jackson tacked-on an RBI single, and Roberts capped a five-run second with a two-run double.

The eight-run cushion would be more than enough for Aces starter Bryan Augenstein (1-4), who picked up his first victory of the season, tossing seven innings and holding the 51s to just one earned run.

Las Vegas starter Rey Gonzalez (3-2) was roughed up for 10 earned runs in just four innings of work, taking his second loss of the season.

Reno out-hit Las Vegas 15-5 in the game, led by Roberts’ 3-for-5, four-RBI night. Conor Jackson went 2-for-4 with a home run and two RBIs in his second rehab start in Reno, while Bailey continued his hot hitting at home, going 2-for-5 with two RBIs.

Reno hits the road Friday for a four-game set with the Portland Beavers, Triple-A affiliate of the San Diego Padres. Reno will send RHP Billy Buckner (2-1, 4.85 ERA) to the mound against Beavers RHP Josh Greer (0-2, 4.91 ERA). First pitch is set for 7:05 p.m. from PGE Park in Portland, and all the action can be heard live in Reno on Fox Sports Radio 1450 AM.

The Aces return home on Tuesday, May 11 at 6:05 p.m. for 50-cent hot dog night at Aces Ballpark. Tickets for all Aces games start at just $7, and are available by calling the Reno Aces box office at (775) 334-7000 or by visiting RenoAces.com. The brand-new Freight House District, located just outside Aces Ballpark, is open seven days a week, on both gamedays and non-gamedays.