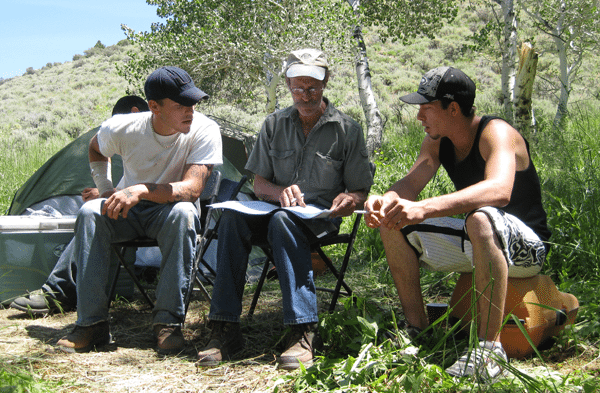 The UNCE Bootstraps program provides jobs and job training for 18- to 25-year-old men and women in northern Nevada who are neither in school nor working. Participants get hands-on training in various skills and then are sent out into remote areas of the state on a natural resource improvement project.

A 2009 study by the Annie E. Casey Foundation found that Nevada has one of the highest rates in the nation for youth not working and not in school. The problem is particularly evident in remote, rural communities in central Nevada, where the economic downturn has made it tougher for young people to find work. But the ARRA grant will help keep the Bootstraps program going for another three years in Lander County, UNCE Extension Educator Rod Davis said.

“There are a lot of programs out there that teach you how to get a job but not many teach you by letting you do the job,” said Davis, who credited the state and local offices of the Bureau of Land Management for helping him secure the grant. “We follow the old Extension philosophy of learning by doing. We expose these young people to life skills and then we let them practice it in a safe and secure environment.”

After two weeks of classroom work, in which the students learn about emergency communication, first aid, off-road and defensive driving, map reading and chainsaw safety, use and maintenance, Bootstraps crews head into the backcountry for several months of hard work.

While living in remote campsites, they work in the morning and evening and take classes toward their high school GED during the heat of the day. Those who want to study get to do so in an air-conditioned trailer donated by Barrick Gold; those who want to sleep have to go to their tents. Participants get paid for the hours they work in the field. Davis designed the program and launched it in 2005. A similar UNCE program was launched in Tonopah in 2007.

“Bootstraps is a great example of Cooperative Extension identifying a need and developing a program to address the need,” said UNCE Dean and Director Karen Hinton. “What’s great about Bootstraps is that it helps the youth but it also improves our natural resources and saves the taxpayer by keeping participants out of trouble. They become contributing members of their communities. The benefits are long lasting.”

The Bootstraps program in Lander County focuses primarily on restoring sage grouse habitat that is threatened by invasive pinyon-juniper forests. Since the program started, Bootstraps crews have rehabilitated more than 1,500 acres of sensitive stream-zone habitat the sage grouse need for nesting and raising its broods.

“For a lot of these kids, going to bed tired after a hard day’s work is something new and they enjoy it,” Davis said. “They also learn independence and self-reliance. They start reading books again. They learn to cook for themselves and others, and they learn the value of teamwork.”

Bootstraps also gets financial support from various government agencies and private groups, including the Bureau of Land Management, the USDA’s Children, Youth, and Families at Risk Program, the National Fish and Wildlife Foundation, the Lander County Conservation District, the Nevada Department of Wildlife, the National Mule Deer Foundation and Nevada Bighorns Unlimited.

From 11-15 participants go through each six-month session. In addition to the field work, they’ll put together a resume, participate in job interviews, take tours of colleges and trade schools, and get help getting their high school diploma. Most graduates will either return to school when the program is over or get jobs. Very few wind up where they started – out of school and out of work.