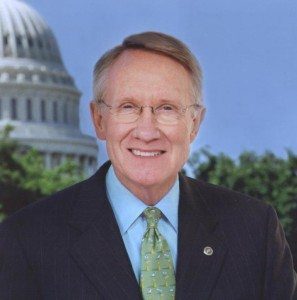 LAS VEGAS – Nevada Sen. Harry Reid kicked off his “Driving Nevada Forward” bus tour in his hometown of Searchlight Monday. Following the morning event with more than 100 of his neighbors, Reid boarded the campaign bus and headed for a solar plant in El Dorado Valley, an event with first-responders in Pahrump, and ended the day at a rally in Las Vegas with more than 1,500 supporters.

In Searchlight, Reid thanked Nevadans for their support, talked about the challenges facing the Silver State and discussed his vision for creating jobs and strengthening Nevada’s economy.

Below are Reid’s remarks as prepared for delivery in Searchlight:

To everyone here this morning, thank you for coming out to my hometown.

Searchlight is so much a part of who I am and what drives me as I serve Nevada in the Senate.  Against fairly long odds, I’ve been fortunate to rise to the position I hold.

That’s what makes this country so great – that someone like me, who came from this little mining town, can serve Nevada as Senate Majority Leader.  I am grateful to have this position that allows me to do what I can for my home state.  I want every child in this great country to have the same opportunity – whether they are from Searchlight, Elko or west Las Vegas.

That what this campaign and our “Driving Nevada Forward” bus tour are all about–getting our state and our country back on track and laying the foundation for a brighter tomorrow.

Times are tough right now, but we can’t forget where we were headed.  That’s why we took action to stop the bleeding in our economy.

We passed the Recovery Act, which prevented a bad situation from getting worse.  It’s bringing $2.1 billion into Nevada and is protecting tens of thousands of jobs.

We passed the jobs agenda, which is helping put Nevadans back to work.  We made a down payment on that in our first of many Jobs Bills, which includes tax cuts for small businesses to jump start hiring; tax credits to keep employees on payroll; and investments in roads and bridges to create jobs.

We passed the Travel Promotion Act, which is investing in the backbone of Nevada’s economy.

This will create 6,000 jobs this year alone by promoting Nevada and nation around the world.

We need an education system that will produce a workforce that will attract employers to our state.  That’s why we are helping Nevada veterans through the 21st Century G.I. Bill of Rights.  It’s why we took steps to make student loans more affordable.  And that’s why I have been pushing state leaders to help position Nevada so it can compete for Race to the Top funding.

Education is particularly vital as we lay the foundation for Nevada’s clean energy economy.

From here, I’m going to visit Copper Mountain Solar, the largest solar energy project in America, and an example of the types of jobs that are coming our way.

I’ve helped bring hundreds of millions of dollars to invest in this important industry that will create jobs here and diversify our state’s economy.  Some of that money will go toward building an energy transmission line that will create 1,000 jobs and allow Nevada to take full advantage of our clean energy resources.

Jobs are obviously a critical priority and we are continuing to address this challenge, but we are facing a host of other challenges as well – such as our broken health care system.

Like unemployment, no state knows this challenge better than Nevada, with one of the highest uninsured rates in the nation.

The legislation we passed will help Nevadans by putting them in control of their health care instead of insurance companies; closing the Medicare Donut Hole so seniors can afford their prescriptions; cutting premiums for Nevada families by an average of $2,000; and providing tax credits to help small businesses provide health insurance to their employees.

There’s a lot we’ve been able to do to address our state’s challenges.  But don’t think for a minute that our work is done.

Will it happen overnight?  No, it’s going to take some time.  But I will not rest until Nevadans have confidence that the job they have today will be there for them tomorrow, that they will be able to keep the homes they have worked so hard to build, and that their children will get an education.

“Driving Nevada Forward” isn’t just a campaign slogan, it’s my commitment to all of you that I will continue to work hard to create jobs, get our economy back on track and create a future full of opportunity for Nevada’s generations to come.  I hope you will join me on this journey to get Nevada moving again.

Thank you again for being here this morning and thank you for all of your support.