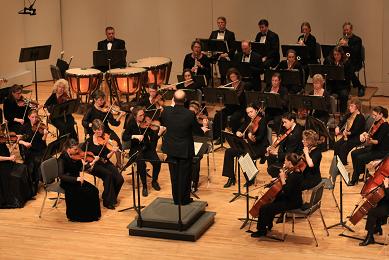 “It is a pleasure to announce the Reno Chamber Orchestra‘s 2010-2011 season. The trouble is that as I try to describe it, I keep coming up with clichés and hyperbole. However, from our great guest soloists, to Theodore Kuchar and the wonderful RCO musicians, to music that includes both familiar masterworks and pieces you will probably never again have a chance to experience live, I really do believe what we have in store is THAT exciting.

“We open in September with works by Mozart, Dvorak, and Schubert. October features infectious music by Latin American composers, a collaboration with members of the UNR Percussion Ensemble, and an amazing violin prodigy performing Tchaikovsky. The January concert showcases some of the RCO’s stars playing Bach, works by two important Czech composers, and the winner of our annual College Concerto Competition. February brings violinist Joan Kwuon to town for two ‘Concerto #1’s,’ a pair of short but important works by Charles Ives, and Haydn’s Symphony No. 88.

“We close the season in March with a Nevada Chamber Music Festival favorite, as pianist Orion Weiss returns to play the lush, seldom-heard Piano Concerto of Scriabin. Also, as with our leadership in the Ford Made in America project, the RCO is again at the vanguard of commissioning important new music in our country. We are part of a group of 36 orchestras (including the Chicago Symphony, Saint Paul Chamber Orchestra, and National Symphony), which has engaged one of the world’s most celebrated composers, Osvaldo Golijov, to write a piece in honor of Henry Fogel’s retirement as President of the League of American Orchestras.

“The RCO is changing our ticket pricing to reflect our commitment to being more meaningful, and accessible, to more people. We will now have three seating areas, with the highest priced tickets staying the same as they’ve been for the last three seasons. While we are no longer offering senior discounts, the other two seating areas will be at greatly reduced prices, and all youth and full-time students will be admitted for $5. (See the seating chart here.)

“As an incentive to subscribe, first time season ticket buyers will receive a substantial discount. We will be in touch with you to discuss seating.

“We believe that filling the hall with devoted music lovers who are committed supporters of our cause is more important than the incremental bump in income we might receive from slightly higher prices. In these challenging economic times, we are holding the line on price, while asking you to purchase season tickets and encourage your friends to subscribe as well.

“A special bonus: if you subscribe before June 1, 2010, we will be happy to give you a free copy of cellist Zuill Bailey’s Russian Masterpieces CD (featuring two works he has performed in past seasons with the RCO). In addition, we will send you a voucher for two free tickets to an RCO concert. We hope that you will enjoy these incentives, and that you will join us for a fantastic 2010-2011 season.”

To order tickets, call the RCO, or download an order form at our website that you can send or fax us. Season tickets will be available online after June 1.