U.S. Secretary of Education Arne Duncan last year introduced “Race to the Top,” a program of $4.5 billion in competitive grants to be awarded to states that inaugurated serious education reforms.

Reforms spotlighted included promoting charter schools and lifting charter school caps. The Obama administration also made it clear that states pursuing tenure-law reforms that remove bad teachers from classrooms and states embracing the use of student testing data for teacher evaluations would have better chances at the grant money.

Forty states submitted applications for round one of the grants. Duncan then whittled contestants down to a “Sweet 16.”

Among fans of education reform, Louisiana and Florida stood out as favorites. On March 29, however, the surprise winners of round one were Delaware and Tennessee, sharing $600 million.

That Delaware and Tennessee won over others, especially Florida, shocked many observers. More important, it suggested the “game” may have seriously changed—for the worse.

While Tennessee has used value-added assessment to assist in grading and improving teacher quality for 20 years, the state’s charter school law ranks only 28th out of 40, according to the charter school-focused Center for Education Reform. Importantly, Tennessee achievement is consistently walloped by that of Florida on the National Assessment of Educational Progress.

Charter school laws in Delaware are much better—ranking 13th but still falling just behind Florida’s. Unlike in Tennessee, student achievement in Delaware is very impressive. While some may attribute the achievement to the $12,600-plus per pupil expenditures in 2007, the reality is that many of Delaware’s students are able to exercise choice. According to Dr. Matthew Ladner of the Goldwater Institute, 35.7 percent of Delaware’s students attend charter schools or private schools or are homeschooled.

So what’s the method to the madness that is Race to the Top? The answer isn’t clear. The administration apparently didn’t play favorites with states based on political make-up, and union support or opposition to the advertised application criteria is evenly rounded out among the top 16. Having good or bad charter school laws didn’t seem to have much effect, either. In fact, Kentucky made the Sweet 16 without a charter school law. And while the two states that won have no voucher or tax credit law, states were not penalized (or rewarded) for having school choice programs.

*Washington, D.C. has a Democrat mayor and a Democrat-controlled city council.

Race to the Top scoring may be vulnerable on at least two grounds. First, the demonstrated rubric appears to have been relatively subjective. Second, the scoring rubric appears poorly designed—putting greater emphasis on promises, existing laws and clarity of application and less emphasis on actual student achievement gains over past performance.

Indeed, improving student achievement was worth a mere 30 points out of 500. Participating in the questionable Common Core standards initiative was worth 20 points, and promising to adopt the standards was worth another 20. Showing school district, union and other “stakeholder” support was worth a grand total of 70 points.

Delaware and Tennessee boasted overwhelming support from establishment “stakeholders,” including, prominently, state teacher unions. Duncan acknowledged that, saying: “Both states have statewide buy-in for comprehensive plans to reform their schools.”

“Because there was strong evidence of teacher union opposition,” said one reviewer, “only half of the total points of this subsection were awarded.” The union opposed using student test scores to evaluate teachers on issues such as dismissal, tenure and promotion. Florida, one of four finalist states proposing to use student testing data for at least 50 percent of a teacher’s evaluation, was the only state to propose using student testing data for a pay-for-performance measure.

Florida lost 21 points because of grudging support from district and teacher-union officials. It also lost five points on improving student achievement—despite the state’s outstanding level of success in that area—simply because it did not identify which of a dozen different policy reforms had produced the striking gains.

Florida was also subjected to some bizarre if not nit-picky criticism. One reviewer docked points because Florida’s plan said it would reduce the achievement gap by “holding the achievement of white students constant over the life of the grant.” Another reviewer even asserted—contrary to fact—that “[Florida] is closing its achievement gap, in part, by letting the top flounder.” 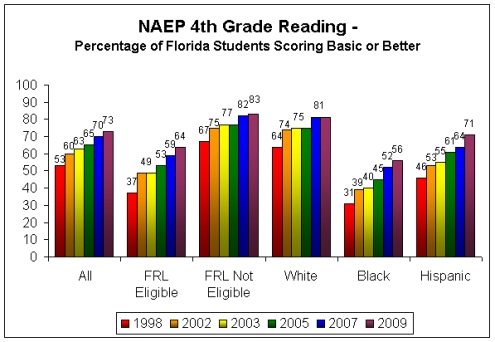 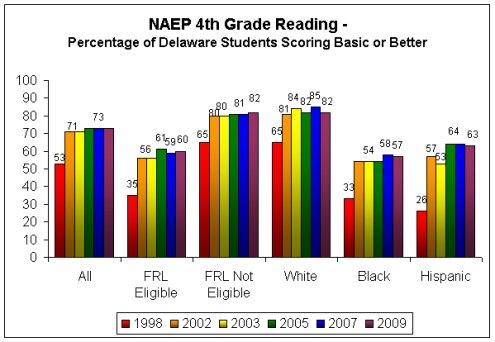 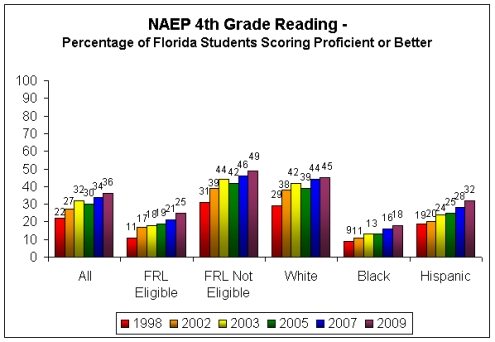 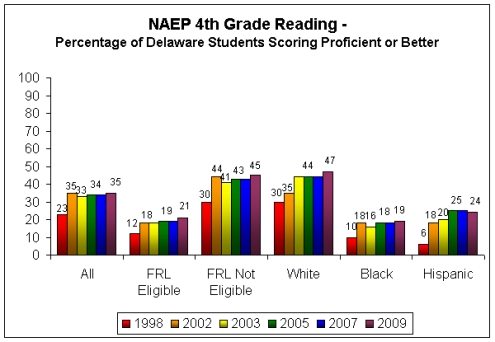 Remarkably, Delaware earned as many points as Florida on the “improving student achievement” metric despite having great but relatively stagnant scores over the last six years.

The result is that round one of Race to the Top has sent a mixed message:

1. Winning the grants is quite difficult and time consuming.
2. Scoring appears arbitrary.
3. A track record of success has little bearing on winning.
4. The Obama administration may not be as serious about charter schools as it first claimed.
5. Support from teacher unions and school districts turns out to be key.

This may be a game changer for Race to the Top, as the Obama administration has effectively given school districts and state teacher unions “veto” power over Race to the Top moneys. Granted such leverage, it would be surprising if those regularly recalcitrant special interests did not use it to hobble meaningful reforms such as using value-added assessment for teacher evaluations, dismissing poor quality teachers, awarding tenure or implementing pay for performance.

But it also is a two-edged sword: Union opposition to Florida’s reform plan cost that state hundreds of millions of dollars, depriving the union of any credibility the next time it calls for increased per pupil spending.

Finally, the administration clearly revealed it is not that interested in emphasizing meaningful reforms like charter schools or other schools of choice—suggesting, in turn, that this isn’t a race to the top at all.

We may just be running in place.