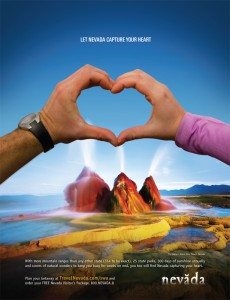 “Our goal is to convince spring and summer travelers that Nevada is their best bet to experience an unforgettable vacation for outstanding value,” Krolicki said. “We’re taking our ads to the busiest marketplaces, where potential travelers spend the most time and are more likely to be influenced.”

“Consumers are starting to make summer vacation plans, and Nevada’s campaign, hitting online, TV and print, is designed to capture their attention wherever they go for information and direct them to discover some of the world’s greatest attractions,” NCOT Director Dann Lewis said.

NCOT’s winter campaign increased public awareness of Nevada as a visitor destination from 32 percent in 2009 to 39 percent, a significant rise during national economic uncertainty. Nearly 40 percent of consumers in the targeted markets claimed to have seen at least one of the ads.

A summer to remember: Hit the road for these rural...

Three Square Food Bank and The Just One Project expanding...