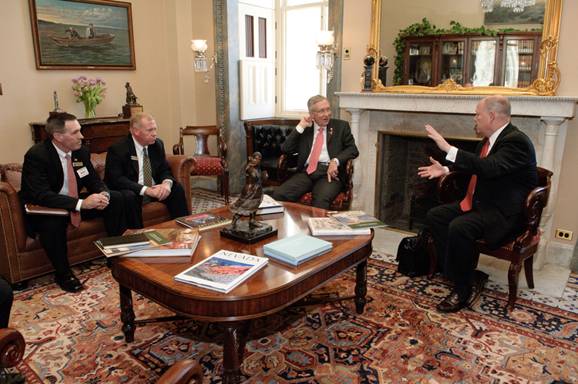 WASHINGTON, D.C.–Nevada Senator Harry Reid today met with shooting, hunting and firearms industry representatives to discuss challenges currently facing domestic gun manufacturers and distributors. Reid discussed his commitment to protecting the Second Amendment and his efforts that led to the passage of a law (P.L. 109-92) that protects gun manufacturers from junk lawsuits, thereby keeping jobs here in the United States.

“Shooting sports are an essential part of Nevada’s western heritage,” said Reid. “I thank the National Shooting Sports Foundation for their continued advocacy for the rights of gun owners and gun producers. The Foundation has been a great friend to Nevada’s hunters and shooters, and has been a major supporter of the Clark County Shooting Park. I greatly appreciate their work to promote shooting sports in the Silver State.”