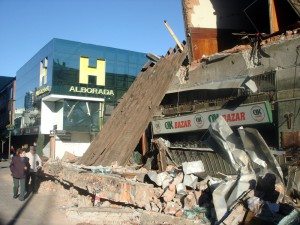 University of Nevada, Reno engineering faculty member Gokhan Pekcan, took this picture of earthquake damage in Chile that shows differences in damage between old construction methods and construction that follows new national building code standards. He was part of a three-man reconnaisance team for the Earthquake Engineering Research Institute effort to document and learn from the magnitude 8.8 Feb. 27 Chilean earthquake.

University of Nevada, Reno engineer and researcher Gokhan Pekcan is safely back in his office today after nine days of surveying damaged public buildings in earthquake-devastated Chile as a member of a reconnaissance team for the Earthquake Engineering Research Institute.

“The three of us had to move fast and report back to EERI in advance of a large team that just arrived in Chile,” he said. The large team will use his observations and directions to more thoroughly document the effects of the 8.8 earthquake.

Pekcan and his two colleagues were in Chile through funding by EERI and Nevada’s College of Engineering to document damage to structures such as hospitals, post offices and other public buildings in an effort to see what can be learned about how buildings can be engineered to withstand earthquakes.

He flew into Santiago and traveled south to Angol for a 1,000-mile round trip through areas with no running water, but surprisingly not as much damage as he expected. He said many resources had been restored, so there was water and gasoline available in many areas, but they went for four days without running water.

“We were there to survey the interior of the buildings and how the nonstructural elements, such as partition walls, ceilings and pipes, were impacted by the earthquake,” Pekcan said. “We visited nine hospitals, wharfs and other facilities. I expected to see entire cities collapsed, but reinforced concrete structures with shear walls designed according to the modern design codes held up. The older adobe-type buildings collapsed as one would expect, but not totally collapsed so occupants were able to exit.”

In the general scouting survey, he found that the buildings with design flaws, such as one four-story apartment he observed, fell down, as one would expect. Yet, a properly designed 24-story apartment building next to it didn’t collapse. Pekcan, a faculty member in the University’s civil and environmental engineering department, described one hospital that showed the benefits of new Chilean building codes and the evolution of improved earthquake-resistant design.

“The older sections of the hospital received a large amount of damage, the more recent additions had less damage, and the new sections of hospital expansion showed only minor damage,” he said.

While he was there, Pekcan experienced two large earthquakes, a 7.2 and a 6.9.

“During the first we were in a small Zodiac boat surveying wharf damage and had to get to shore and scramble to high ground after tsunami warnings were posted. The second happened when we were surveying a moderately damaged paper plant,” he said.

Recovery efforts for the public buildings, especially in the interiors of the buildings, were happening quickly, so he and his colleagues, Eduardo Miranda from Stanford University and Gilberto Mosqueda of the State University of New York at Buffalo, had to move fast to document the damage.

“Our surveys have produced a lot of data and will likely feed into our research here at the University, and possibly even redirect our research progress, on the seismic performance of nonstructural systems,” he said.

The project, headed at the University of Nevada, Reno by the dean of the College of Engineering, Manos Maragakis, is part of a multi-institution effort funded by the National Science Foundation.

Another faculty member, Professor Ian Buckle, has been selected to lead an EERI team to study bridges in Chile. He is a faculty member in the civil and environmental engineering department and director of the Center for Civil Engineering Earthquake Research and the large-scale structures laboratory.

Students to dive under desks for earthquake drill