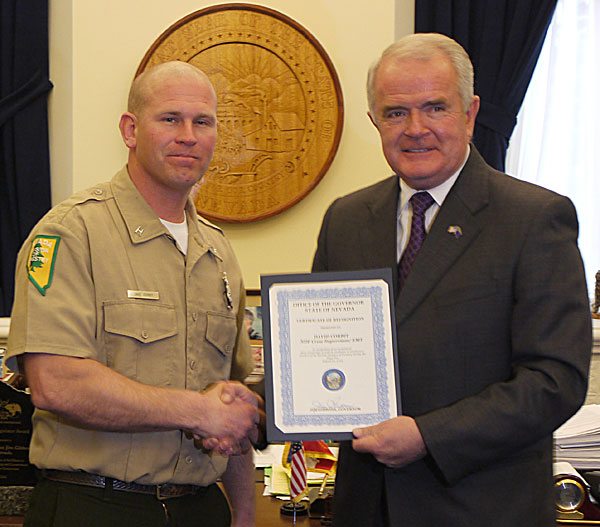 In August, NDF and Forest Service personnel were participating in wildfire suppression efforts on the Hoyt fire near Dixie Valley, northeast of Fallon.

After being notified that a single-engine air tanker (SEAT) had crashed while dropping fire retardant in mountainous terrain, NDF Helicopter Pilot Nick Lopes and Helicopter Manager Lee Stewart were joined by NDF and U.S. Forest Service EMTs and personnel to assist with pilot rescue efforts.

Division of Forestry EMT Dave Corbit, Helicopter Crewmember Mark Blonquist and EMT Isaac Walden from the U.S. Forest Service Black Mountain Hotshot Crew were transferred by NDF helicopter to the crash site where Bureau of Land Management personnel were attending to the critically injured pilot. The SEAT pilot was loaded on the helicopter for transport to rendezvous with Care Flight. Emergency rescue efforts continued during the 45 minute flight, but tragically the critically injured pilot and was declared deceased upon arrival at the Lovelock Airport.

Gibbons said yesterday that firefighting personnel are trained to deal with the worst situations and should be recognized for their efforts. Gibbons presented Lopes, Stewart, Corbit, Blonquist and Walden with statements of recognition for meritorious service and expressed appreciation to each for what he described as difficult but critically important work.

“Wildfire suppression is an inherently dangerous activity and when faced with a tragic aircraft incident within an active wildfire these firefighters went above and beyond the call to duty to save a fellow firefighter’s life. The professionalism, training and dedication shown in their efforts deserves special recognition,” he said.