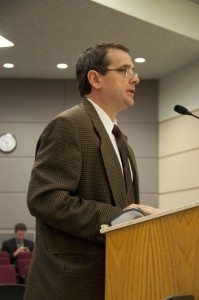 CARSON CITY — Governor Jim Gibbons today accepted the resignation of Department of Conservation and Natural Resources (DCNR) Director Allen Biaggi. Biaggi has been Director of the Department since 1994. “Allen’s service to the citizens of Nevada is a model for all state employees,” Governor Gibbons said, “His devotion to public service is unparalleled. I consider him a consummate professional and a good friend.”

Mr. Biaggi has served under three governors. He is also Chairman of the Tahoe Regional Planning Agency Governing Board. His term on that board expires in December.

In order to make a smooth transition at DCNR, Governor Gibbons has appointed Leo Drozdoff as acting-Director upon Mr. Biaggi’s departure. Mr. Drozdoff is presently Administrator for the Nevada Division of Environmental Protection, an agency within the DCNR. He has been with NDEP for 19 years. Prior to becoming NDEP’s Administrator, Mr. Drozdoff served as the Bureau Chief of Mining Regulation and Reclamation, Water Pollution Control and as Deputy Administrator for NDEP’s water programs. Drozdoff is a member of numerous boards and commissions, some of which include the Petroleum Board, the Rocky Mountain Low Level Waste Board and the Public Employee Benefit Program (PEBP) Board.

“Leo Drozdoff will be a perfect fit to make sure DCNR doesn’t miss a beat during this transition,” Governor Gibbons said.