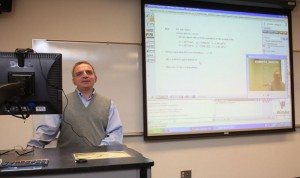 Scientists and students in the highly specialized world of plasma physics virtually attend the University of Nevada, Reno from around the world to learn the latest in plasma spectroscopy from Roberto Mancini, professor and chair of the physics department, through an interactive, real-time, web-based classroom.

Mancini’s expertise in the subject, from over 20 years of research and teaching, attracted students and scientists to participate in the course from places such as Lawrence Livermore National Lab, the University of Rochester (home of the national Omega Laser Facility where fusion experiments are conducted), University of Las Palmas in Spain, Ecole Polytechnique in France, Trinity College in Ireland, Imperial College in the U.K., University of California, San Diego, Colorado State University, University of Texas, Austin and Los Alamos National Laboratory.

“This course is a testament to the caliber and expertise of our faculty, known and respected worldwide,” Marc Johnson, University provost, said. “It’s a prime example of how we attract students from around the world to our state, whether on-site or virtually, and build a base of knowledge that can help our economy grow.”

“We have graduate students, post-doctoral researchers and scientists participating” said Mancini, whose research interests and accomplishments include atomic and radiation physics of high-energy-density plasmas, radiation transport, x-ray spectroscopy of plasmas and multi-objective spectroscopic data analysis. “This course content is based on experience gained from years of research; and not many institutions have this kind of class. The students are interested in the knowledge more than class credits.”

Mancini, who is well-known in the international physics community for his plasma spectroscopy work, advertised the course to selective places within that specialized community where he knew people were interested in mastering the knowledge in this field and could now be reached, and taught, more effectively through the Internet.

In all, the graduate-level high-energy density plasma spectroscopy course in the College of Science has 16 students attending in the second floor conference room of the University’s Leifson Physics building, and another 30 more scattered around the country and the world. The audio-activated system allows the class to see who is talking, helping Mancini interact with his students, which is important when he is explaining how a spectrometer can distinguish temperatures in the 100,000-plus degree range. He can show graphs, equations and other content in explaining how to measure the fundamental properties of plasma.

“All the students need is a browser, and with a microphone and web camera they can ask questions and participate in class discussions,” he said. “Students learn how to interpret the data in order to extract the temperature and density of the plasma, and how ionized it is; to decompose the light that the plasma emits and learn why certain colors and intensities appear at certain temperatures. The spectrometer is the instrument we use to observe and record what plasma does.”

Mancini said a group in Japan wanted to take the class, but due to the time difference, they would need to be awake at 2 a.m. to participate. The students in Europe take the class at 6 p.m. their time.

“This is a course with international appeal, a topic that is highly specialized and a professor with incredible expertise” said Jill Wallace, a manager in Nevada’s Information Technology department who helped Mancini set up the course through Wimba Live Classroom, a software that enables the interactive live classroom. “This is as much like face-to-face as you can get, which is important for the professor to interact with his students.”

“Since summer 2009 the University has conducted 231 web classes, but those are much different than Mancini’s course since they aren’t synchronous, or live, real-time,” Gay Neuberger, a director in the Extended Studies Program, said.

Neuberger said two other professors use Wimba to reach outside Nevada’s borders, one in mining engineering and one in psychology, but no one else on campus has used all of its features to the extent that Mancini has to reach students from coast-to-coast and in Europe.

“This system makes it easier to conduct class in a more traditional style over the Internet, to reach people elsewhere who want to master this knowledge and don’t otherwise have access,” Mancini said. “It’s a very rewarding teaching experience.”