Will perform with the orchestra Feb. 27 and 28 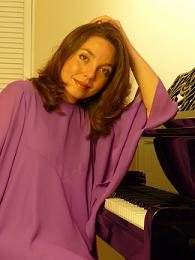 Competitors from across the state of Nevada took part in the 2010 College Concerto Competition. They performed a concerto – a piece of music for solo instrument with accompaniment – of their choosing, with the prizewinners chosen by a panel of three distinguished judges.

Ms. Pisarenko was chosen as first prize winner, and will perform Mozart’s Piano Concerto No. 21, the work with which she won the Competition, at the Chamber Orchestra’s February 27 and 28 concerts. The Competition’s second prize went to violist Deanna Said of Reno, and third prize to trumpeter Joshua Dunlap of Reno.

Maria (Masha) Pisarenko was born in Siberia, and at age 12 traveled to Moscow where she competed in the First Tchaikovsky Youth Competition. Her performance there led to her acceptance into the Central Music School of Moscow Tchaikovsky Conservatory where she graduated in 1997. She later studied at the Russian Academy of Music “Gnesinyh,” earning her Bachelor/Master of Music degrees in 2005. Ms. Pisarenko has performed solo and chamber recitals and concertos with orchestras in Russia, other European countries and the United States. She is also a winner of several international competitions, including second place in the International Piano Competition held by the Frederick Chopin International Organization (Rome, 1996), and in the International Piano Competition in memory of Sviatoslav Richter (Paris, 1997). She is currently working towards her Doctorate of Musical Arts Degree at the University of Nevada, Las Vegas.

The College Concerto Competition is made possible by a generous grant from The Bretzlaff Foundation.

The Reno Chamber Orchestra, founded in 1974, provides the highest quality performances of repertoire written for smaller orchestra. It works to instill and promote the appreciation of music among audiences diverse in age, backgrounds and interests throughout the region. Along with its regular season of concerts, the RCO presents the annual Nevada Chamber Music Festival in December. More information on the RCO can be found at RenoChamberOrchestra.org.