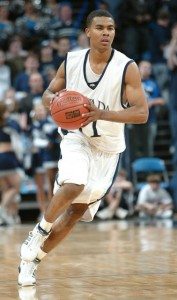 Ramon Sessions will be honored by the Wolf Pack Saturday night.

The University of Nevada will hold “Ramon Sessions Night” and honor the former Wolf Pack star prior to its game with Boise State on Saturday, Feb. 13.

Nevada will give Sessions, who is currently playing with the NBA’s Minnesota Timberwolves, the Senior Night he never had and present him with his game jersey prior to the game, which will tip off at 7:05 p.m. at Lawlor Events Center.

Sessions helped Nevada to Western Athletic Conference championships and NCAA Tournament appearances in each of his three seasons at Nevada from 2004-07. A finalist for the Bob Cousy Award which is annually presented to the top point guard in the country, he earned second-team All-WAC honors in 2007 after averaging 12.3 points and 4.7 assists per game that season. He led the Wolf Pack in assists in each of his three years at Nevada and finished his career ranked second in the Nevada career record book with 478 assists. The 2005 WAC Freshman of the Year, Sessions started 94 of 97 career games at point guard at Nevada before leaving school after his junior year to enter the NBA Draft.

Sessions was selected by the Milwaukee Bucks in the second round of the 2007 NBA Draft. During his rookie season, the Myrtle Beach, S.C., native set a franchise record with 24 assists in a game and became the first Bucks player to notch 20 points and 20 assists in the same game. The next year, he led Milwaukee and ranked 18th in the NBA with 5.7 assists per game. This seasons, he signed a four-year contract with the Minnesota Timberwolves and is averaging 7.6 points and 3.1 assists per game.

Since leaving the University of Nevada, Sessions has remained active in the northern Nevada community. Last June, he returned to Reno to host a basketball camp and has been a speaker at the Wolf Pack’s basketball camps each summer. He has also helped the Wolf Pack coaching staff raise money for the American Cancer Society by attending the Suits and Sneakers Ball each spring.

For tickets to the Boise State game, visit or call the Link Piazzo Ticket Office at Legacy Hall at (775) 348-PACK. For more information or to purchase tickets online, log onto www.nevadawolfpack.com.

Opinion: Gibbons leaves money on the table, passes the blame