RENO, Nev. – The Bureau of Land Management (BLM) Winnemucca District has concluded the Calico Mountains Complex gather north of Gerlach, Nev., with 1,922 excess wild horses removed.  The gathered horses were transported to the Indian Lakes Road holding facility in Fallon, Nev. where they are being prepared for the BLM’s adoption program or for long-term holding pastures. 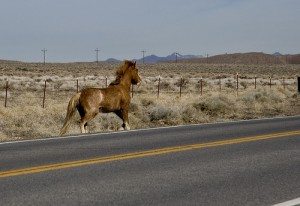 Based on aerial reconnaissance by the BLM, an estimated 600 wild horses remain in the Complex, which is within the appropriate management level range of 600 to 900 established for that area.  In late spring, the BLM will conduct a comprehensive post-gather inventory of all the herd management areas (HMAs) in the Calico Mountains Complex and the surrounding area.

“The gather went well, despite the weather-related delays we experienced throughout the operation,” said Gene Seidlitz, BLM Winnemucca District Manager. “By reducing the populations now, we can avoid the potential for an emergency gather situation later this summer.”

Thirty-nine horses have died since the gather began: seven at the gather site and 32 at the facility in Fallon.  Most of the deaths were horses that were in extremely poor body condition because of the lack of forage on overpopulated rangelands.  These animals either died or were euthanized by the veterinarian on-site at the Fallon facility.