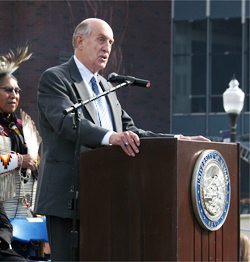 The Reynolds School of Journalism and Center for Advanced Media Studies will examine hotly-contested races in the 2010 elections at the Jim Joyce Endowment in Political Communications program on Jan. 27 at 7 p.m. at the Joe Crowley Student Union Theatre.

“This event encourages students and the community to participate in analysis of the inner workings of politics and media, which both fascinated and inspired my father’s lifelong career,” said Robin Joyce, chair of the Jim Joyce Endowment and chair of the Reynolds School Dean’s Council.

Joyce established the endowed event in 2007 to honor his father and to encourage debate and discussion. His timing was fortuitous. In 2008, the Nevada caucus was moved to Jan. 19, making Nevada, Iowa and New Hampshire among the first states to participate in the historic presidential campaign and November election process, which has provided opportunities for political journalists, elected officials and political insiders to explore issues, trends, election outcomes, and to discuss the future of Nevada politics.

“This is a remarkable opportunity to hear from experienced and knowledgeable reporters and political observers,” said Jerry Ceppos, Reynolds School dean. “Also, it will be a treat to watch Joe (Crowley) moderate the discussion. He is often described as Nevada’s elder statesman.”

Jim Joyce changed Nevada’s political landscape during his 20-year career. The Reynolds School graduate managed campaigns for some 300 candidates. He lost fewer than 30.

The 2008 event explored the impact of debates on the presidential nomination process with Frank Fahrenkopf Jr., co-chair of the Commission on Presidential Debates; Jon Ralston, political commentator and columnist; and Anjeanette Damon, political reporter for the Reno Gazette-Journal.

The Reynolds School of Journalism is Nevada’s only accredited journalism school.