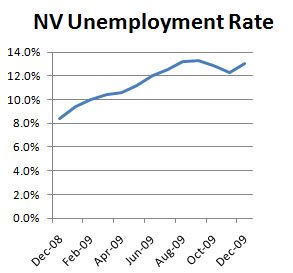 Nevada’s unemployment rate rose to 13 percent this December, according to a press release from the Nevada Department of Employment, Training and Rehabilitation.

Bill Anderson, the chief economist from Nevada’s employment department, characterized 2009 as a “historically bad year for Nevada’s Economy” and said that the loss of 12,500 jobs in December casts “further doubt on the likelihood of a near-term economic recovery in Nevada.”

The construction industry suffered the most over the past year, losing about 29,500 jobs during 2009 with an estimated 5,300 jobs lost in December alone.

According to the report, the only industry to receive an overall increase in jobs was Education and Health Services, which gained 3,600 jobs in 2009 – a 3.7 percent increase.