CARSON CITY – Nevada’s taxable sales fell by 10.9 percent in November 2009 over the same month in 2008, making it the 13th month of double-digit declines in economic activity in the state. The $3 billion in goods sold in Nevada in November brought the fiscal year to date taxable sales decline to 18.1 percent.

Gov. Jim Gibbons said: “The release of taxable sales and revenue collection data for the month of November indicates that, although revenues continue to decline in light of the sustained weakness in the housing and job markets, the pace has slowed.  The administration continues to search for ways to save money, reduce spending, and promote efficiencies in government.”

All major taxable sales categories except clothing and accessories stores, up 2.7 percent, were down in November 2009 compared to November 2008. But some of the declines were more modest than in previous months. Home furniture and furnishings were off by 1.4 percent, while general merchandise stores were off by 1.5 percent.

The largest categories continue to show a state economy that is in a protracted slowdown, however.  Motor vehicle and parts dealers were down 9.3 percent, bars and restaurants were down 10 percent, the construction industry classification was off by 44.6 percent and merchant wholesalers-durable goods were off 30.2 percent.

The taxes generated by the sale of goods are a major source of revenue for the state budget. In part because of the continued slump in taxable sales, Gov. Jim Gibbons and the Nevada Legislature face a $1 billion shortfall in the current two-year budget that will require major cuts to programs and services. A special session of the Legislature to deal with the shortfall is expected in late February or early March.

The 2009-2011 budget was balanced by the Legislature using the assumption that taxable sales would decline by an average of 4.9 percent this year and grow by 2.1 percent in the fiscal year that begins July 1.

But on Friday, those estimates were revised downward to reflect an average 13.4 percent decline this year and a 4.7 percent decline next year. The difference is nearly a $183 million shortfall in this state budget revenue source alone. Assumptions for other major tax revenues were lowered as well.

Dino DiCianno, executive director of the Tax Department, said Friday during a hearing on the new revenue estimates that Nevada has a long way to go to get out of the current slump.

“I do see some glimmer of hope; there are certain sectors within the economy in this state that are starting to rebound,” he said. “But the problem is, without construction, which is a major driver, and without automobile dealerships selling cars, we’ve got a long ways to go folks, a long ways to go.” 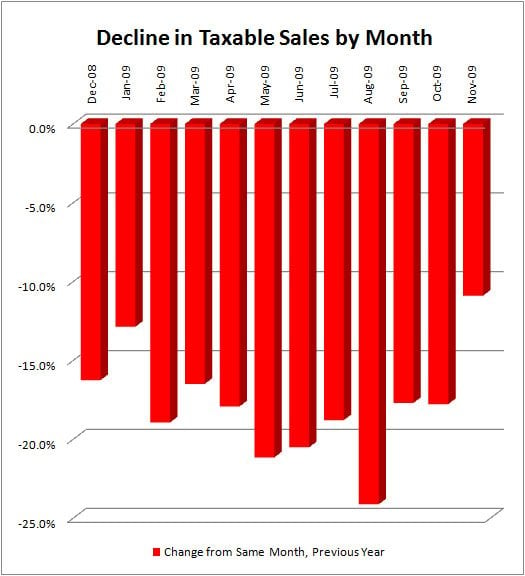