I have read quite a bit of American history over the last year. I’ve enjoyed it and learned a lot. But everything I have been reading took place in the eastern half of the U.S. So I decided I wanted to read Men to Match My Mountains by Irving Stone about the explorers and early settlers of California, Nevada, Utah and Colorado. I wanted to be able to visit the locations and learn more about the history of the area where I live. 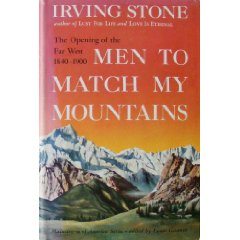 It was fun to read about Theodore Judah who laid out the route for the first train route across the Rockies. I followed that route when I took the train back from Sacramento last week.

It was interesting to read about how California was settled by the Mexicans, how the Americans moved in, the enormous role that John Sutter played in settling the area around Sacramento, and how the American Lieutenant John C. Freemont in 1844 on one of his exploring trips came south from the Oregon border.

“The next two weeks were spent in this frightening death like country until the party reached a thirty five mile long lake which Fremont called Pyramid Lake and from which his men gorged themselves on salmon trout. On this newly garnered strength they pushed through to the present site of Reno and south of that to the Carson River.”

Last summer my husband and I explored that area north of Reno in a wonderful road trip.

Virginia City which is a very short drive southeast of Reno was the center of the silver mining that was done on the Comstock Lode. It was fascinating to read how the rich silver deposits were discovered and opened up.

The miners were looking for gold and ignoring the fact that the Mexicans kept talking about how much silver was in the area. B. A. Harrison from Truckee Meadows collected some rock from the area and sent it to be assayed. The editor of the Nevada Journal in Nevada City, California split it in two parts and sent it to two independent assayers.

“On July 1, 1858 the Nevada Journal published the results of the two assays: the black rock was incredibly rich. It not only proved the Mexican cry of “Mucho plata” with its one third assay of silver, but also contained high proportions of gold, antimony and copper.

Hundreds of miners walked out of the California mines and made their way over the Sierra Nevada on horseback, muleback and foot. The first legal claim office was setup in V.A. Houseworth’s saloon. In Gold Canyon the old timers were lost in a flood of newcomers. By mid July all roads and trails over the mountains were jammed with thousands of men pouring into the new fields.”

The money that came out of the Virginia City area is staggering. In 1875 “the Consolidated Virginia and adjoining California mine were the richest producing mines in the history of the world.” At that time they paid over $1,000,000 a month in dividends Today Virginia City is a small little town with an economy that seems to be centered only on tourism. What a change.

I’m looking forward to continuing to read about this area and to traveling around to see the sites I am reading about. Can you recommend any good books?