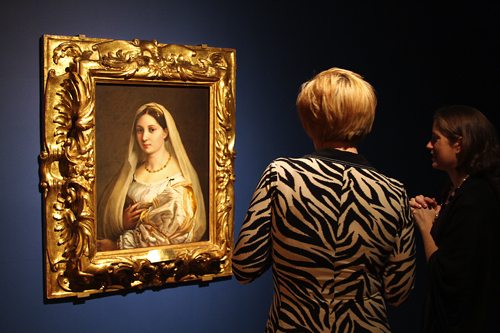 The private papal chambers of the Vatican weren’t the only surfaces favored by the brush of High Renaissance master Raphael Sanzio. Equally famous in his own time were his portraits, one of which, “La Velata” (“The Woman with the Veil”), now graces the walls of the Nevada Museum of Art in Reno.

Though 500 years have passed since the master rendered her timeless beauty, visitors to the museum can be disarmed by the directness of her gaze, wonder at the hint of a smile in her eyes or marvel over the sumptuous richness of her clothes.

“Look at the way she clasps her hand to her chest,” said museum spokesperson Rachel Milon. “The intimacy of her pose adds to the myth and mystery surrounding the model who many believe may have been a mistress of Raphael.”

In a partnership with Arte ITALIA through its relationship with New York-based Foundation for Italian Art & Culture, Raphael’s masterpiece will hang in the E.L. Wiegand Gallery at the Nevada Museum of Art through March 21, 2010 where spectators can gaze at the lone painting on display and draw their own conclusions. 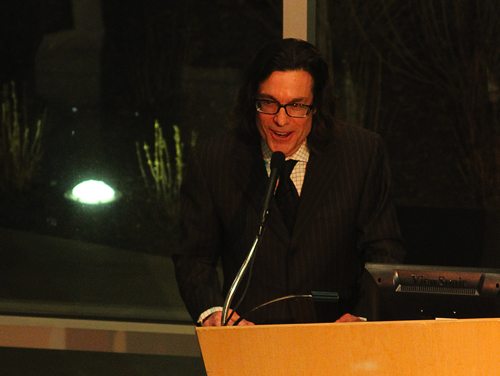 David Walker, the executive director and CEO of the Nevada Museum of Art stressed the importance of this exhibit to art education. “This is a wonderful educational opportunity for students,” said Walker.

According to Walker, “Being introduced to visual arts when young will have an impact forever.”

Reno resident Sharon Neville brought her 13-year-old daughter Hannah Fuqua to the opening talk by David Alan Brown on Saturday. “I wasn’t surprised that Hannah wanted to see the painting because she loves art,” said Neville. “I was surprised she wanted to hear the lecture.”

The Nevada Museum of Art typically gets 8,000 kids per year.

Neville couldn’t get tickets to the sold out auditorium where Brown spoke, but viewed the presentation with her daughter from a nearby auditorium where the museum simulcast the talk due to high demand.

The museum is hosting a series of events and educational programming in conjunction with the display of “La Velata.”

About La Velata – A Veiled Mystery

Completed in 1516, four years before Raphael died at age 37, the single painting The Woman with the Veil (La Velata in Italian) depicts a woman wearing a veil and embodies some of the high Renaissance master’s distinctive qualities: his control over pigment and color, and a serenity that contrasts with the style of his mentors and fellow icons of the era, notably Leonardo da Vinci and Michelangelo.

One of Raphael’s two primary biographers, Giorgio Vasari, claimed the woman in the painting was his “mistress whom Raphael loved to the day of his death. Of her he made a very beautiful portrait…” Yet the Renaissance fascination with the idealized human body also suggests that the portrait may not be of just one female figure, but instead a fusion of many different models to yield Raphael’s idealized representation of the feminine beauty.

Raphael (1483-1520) also known as Raffaello Sanzio, was born in Urbino, Italy. His father, Giovanni Santi, was a painter and a poet. Raphael trained in his father’s workshop and later in the workshop of the artist Pietro Perugino. In 1504 he began spending time and perhaps even resided in Florence, where he was influenced by the work of Leonardo da Vinci. Eventually, he moved to Rome where, under the patronage of Pope Julius II, he entered his most productive phase as an artist. He managed a large workshop of pupils and assistants, many of whom became well-known artists in their own right. Raphael’s personal life was complex. He never married but was reputed to have had many relationships. In 1514 he became engaged to Maria Bibbiena, the niece of an influential Cardinal and Raphael’s friend. The marriage never took place, and she died in 1520. Raphael lived a grand lifestyle in Rome and attained some status at court. It is believed that he died on his 37th birthday in 1520. He left a significant portion of his estate to his mistress Margherita Luti and he was buried in the Pantheon.

The Woman with the Veil will be presented at the E. L. Wiegand Gallery of the Nevada Museum of Art through March 21, 2010. The Museum is open Wednesday through Sunday from 10am to 5pm and open on Thursdays until 8pm. Admission is $10 for adults, $8 for seniors and students, and $1 for children ages 6 to 12 years. Admission is free for Museum members. Additional information is available at www.nevadaart.org and www.arteitaliausa.com. In addition to its presentation in Reno, the painting will tour to the Portland Art Museum and the Milwaukee Art Museum before returning to Italy.

Raphael: The Woman with the Veil