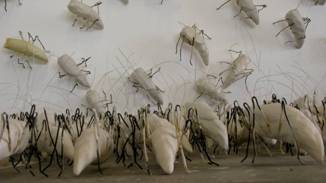 Tuscarora, Nev., sees its fair share of insects each year as an annual invasion of Mormon crickets engulfs the small town, population 13. For resident and artist Elaine Parks, the infestation is an event she anticipates with both deference and dread, illustrated in her upcoming exhibition Swarm at the Nevada Museum of Art opening Saturday, Dec. 19.

Consisting of over 1,000 larger-than-life-sized clay crickets, Swarm will encircle viewers much like the insects that take over Parks’ town. Covering the entire floor of the intimate Small Works Gallery, the clay crickets will gather and climb the walls mimicking their counterparts’ ascent of homes, highways and vegetation encountered along their annual march.

A former associate of the Tuscarora Pottery School, Parks moved to Tuscarora in 2000 after receiving her MFA from California State University, Los Angeles in 1999. Parks soon discovered that the town, located about 50 miles north of Elko in the northeastern region of Nevada, is just one of many small towns across the American West that braces for the insects’ visit each year. After hatching in the spring, the insects–known formally as shield-backed katydids–spend all summer marching and eating their way through northern Nevada and western Utah until coming to a stop to lay their eggs and die.

Swarm: Elaine Parks is on exhibition Dec. 19 through March 14 at the Nevada Museum of Art. Guided tours are available free, with admission or membership, each Thursday (except First Thursday) at 6 p.m. and Saturdays and Sundays at 1 p.m. Space is limited to a first-come, first-serve basis. Reservations are not needed. Spanish language tours are available by reservation at 775.329.3333 ex.253.

The Nevada Museum of Art is a private, non-profit organization supported by the generosity of its membership as well as by sponsorships and grants. Through creative programming and scholarship, the museum provides the opportunity for people to encounter, engage and enjoy a diversity of art experiences.  The museum is open Wednesday through Sunday, 10 .am. to 5 p.m., late on Thursdays until 8 p.m.  The galleries, museum store and Café Musée are closed on Mondays, Tuesdays and national holidays.

Book Review: The Return of the Great Depression

Reid: Democrats committed to fixing Medicare Advantage so seniors get more for their money than insurers do