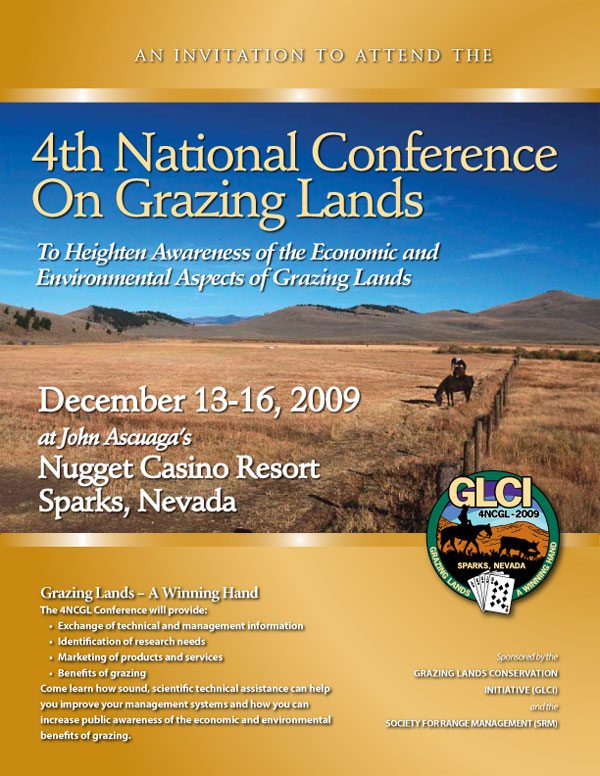 PRNewswire — Ranchers and conservationists share an interest in managing grazing lands for optimum ecologic health. They, and others interested in the environmental and economic implications of range management are invited to a national conference of the Grazing Lands Conservation Initiative (GLCI) being held in Reno, Nevada, December 13-16, 2009.

In bringing its national conference west for the first time, GLCI will in 2009 will give increased focus to western grazing issues. However, the conference will continue its past format of providing information along four “tracks” that will also include Eastern, Midwestern and dairy grazing issues. Some of the issues to be highlighted include the value of rotational grazing and of riparian habitat, carbon sequestration, and the flexibility within grazing systems.

During the conference, the Bureau of Land Management and the Society for Range Management will interviewing conference attendees for a DVD about rangeland issues.

The Society for Range Management is also holding a job fair and on-the-spot hiring.  During the 2009 economic downturn, SRM placed over 40 students and young professionals into jobs with federal agencies.  During 2010, SRM expects to do close to the same or more.  Applications are being accepted beginning today and and applicants could be placed into jobs as early as Thursday.

One thing that sets GLCI apart from other conferences is its focus on ranchers as presenters. “We know experts come from academia, government, and the non-profit world and we welcome them all, but we also look for the ‘cowboy expert’ who has gained his–or her–expertise through long hours with livestock and first-hand exposure to all sorts of elements–natural, economic and political,” says Drake.

Grazing lands management is not just a rural issue, says Bob Drake, Chairman of the Grazing Lands Conservation Initiative (GLCI). With at least two-thirds of the national land base in this grazing land, says Drake, the wise management of these lands has implications not only for the continued viability of ranchers but also for the well being of watersheds and communities who rely on these lands for open space, hunting, hiking, plant and wildlife habitat, groundwater recharge, carbon sequestration and energy collection.

Information on registration and/or exhibitor opportunities is at  www.glci.org.