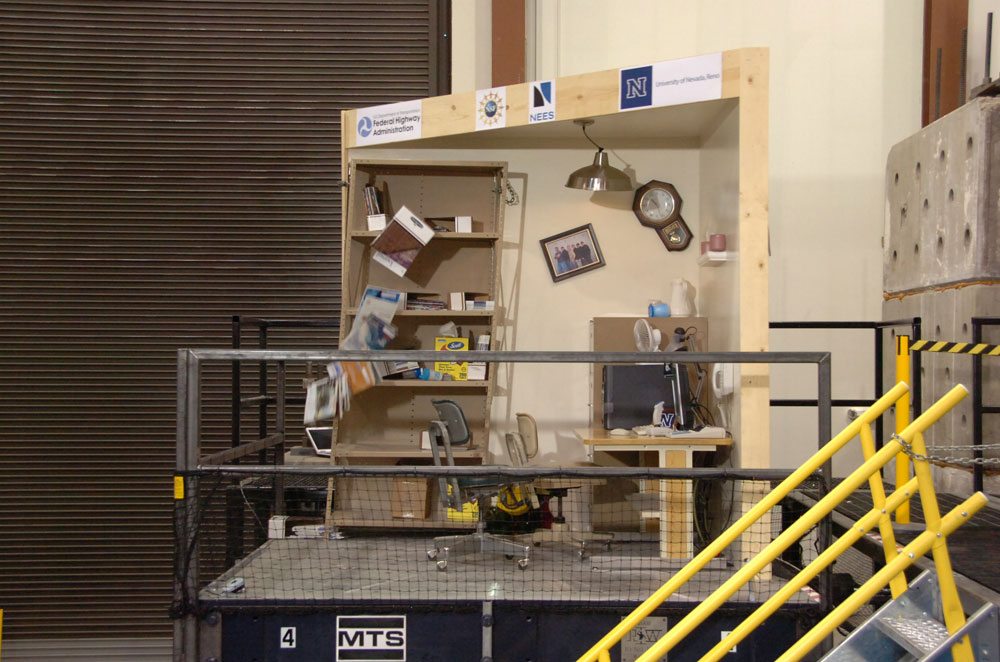 The office swayed and jolted from side-to-side, the floor heaved upwards as the “earthquake” shook from below sending books off shelves, and pictures off the walls in the inaugural run of the new shake table this week at the University of Nevada, Reno’s earthquake simulation engineering lab.

It was part of a celebration of 25 successful years of constructing and destroying large-scale buildings and bridges in the name of science, as well as the unveiling of the new 14-foot by 14-foot, triaxial 50-ton capacity shake table that moves in six different directions (horizontally in two directions, vertically, and pitch, yaw, and roll rotations).

“This is a wonderful occasion,” Milt Glick, president of the University of Nevada said. “We’re recognizing the past and the good things that have happened and at the same time showing the future.”

“The new, fourth shake table will greatly enhance our ability to more accurately represent the motions of an earthquake,” Ian Buckle, director of the Large Scale Structures Laboratory at the University said. The new table will be used individually as well as with the other three shake tables in the earthquake simulation lab for large-structure experiments such as a four-span bridge test to be conducted in the near future, he said.

“For the demonstration of the new table, we built a room on the shake table, a typical office with furniture in it, and subjected it to three ground motions: last year’s magnitude 4.7 Mogul quake on the outskirts of Reno, the magnitude 6.7 Northridge, Calif. quake, and an extremely violent seismic motion used to qualify industrial equipment,” he said.” There was damage.”

Buckle and his crew built the office with two partial walls atop the shake table so the audience could view the dramatic results of the new $2.5 million table at the College of Engineering and Department of Civil and Environmental Engineering’s Large-Scale Structures Laboratory. The innovative table was designed and assembled by the engineering earthquake research team at the University with monetary support from the National Science Foundation and the Federal Highway Administration.

Through the Center for Civil Engineering Earthquake Research’s shared-use policies, research is carried out for federal and state agencies, the private sector and non-profit organizations. In addition to highway bridges, the Center’s current research efforts include the study of non-structural components in buildings and alternative building materials.

“The earthquake research done here at the University and in this laboratory has discovered new knowledge, stretched intellectual boundaries and at the same time provided useful research,” Glick said. “So when there’s a bridge problem in San Francisco, they call upon our faculty to help them solve the design problem. And when they want to design a safer building, where do they come? They come here.”

Almost 20 academic, research, and administrative faculty, research scientists, and technicians are affiliated with CCEER, and about 30 doctoral and masters students are engaged in research projects under the Center’s umbrella. Total research funding in 2009 was about $3.5 million. In its 25-year history the Center has published more than 160 technical reports which describe the results of these activities. In the past 10 years, major research grants and contracts acquired by the University’s Center for Civil Engineering Earthquake Research totaled $38.5 million.

The Large-Scale Structures Laboratory is a member of the George E. Brown Jr. Network for Earthquake Engineering Simulation (NEES) established by the National Science Foundation in 2004. As a NEES Equipment Site, the Laboratory is equipped with four, large-scale, high-performance shake tables; the only laboratory in the world of its kind.

To view or use a short video about the new shake table and to see it in action use this link: http://imedia.unr.edu/media_relations/shake_table_VNR_2.mp4

For more information about the University of Nevada earthquake engineering program and the large-scale structures lab use these links: http://www.unr.edu/cee/, http://cceer.unr.edu/events/cceer25th.html and http://nees.unr.edu/.