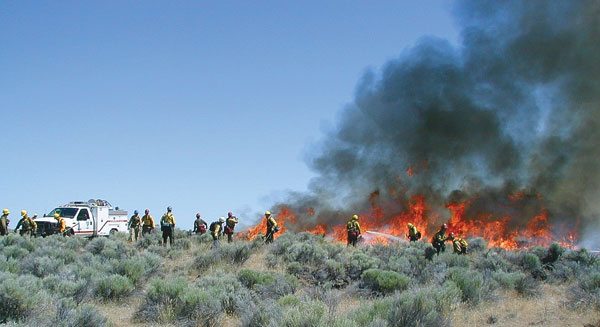 The Bureau of Land Management (BLM), the Bureau of Indian Affairs, and the U.S. Forest Service are accepting applications for summer seasonal firefighting and dispatching positions for the 2010 fire season at locations nationwide, including the Elko area and other duty stations across Nevada.  Applications must be submitted no later than January 19, 2010 to receive first consideration for most positions.

The BLM Elko District Office is recruiting for positions on engine crews at stations in Elko, Carlin and Wells, and for positions on the Ruby Mountain Hotshot crew and the Elko Helitack crew.  Government housing may be available at these stations depending on location.  Salary for these positions ranges from $9.45 to $16.04 per hour depending on experience, with a normal term of employment from June 1 through mid-September.  Selected applicants for the BLM positions must complete a pre-employment drug screen and physical examination prior to appointment, and are subject to random drug screen testing during their period of employment.

Applications for the BLM and the Forest Service firefighting and dispatch positions nationwide must be submitted using the Office of Personnel Management’s USAJOBS website: www.usajobs.opm.gov.  To learn more about fire and aviation employment opportunities and access a link to the USAJOBS website, interested applicants should call the BLM Elko Fire Information Hotline at 775-753-0301, or visit the BLM Elko Fire and Aviation website at www.nv.blm.gov/elko/fire.

The Forest Service, Humboldt-Toiyabe National Forest, is also recruiting for engine crew member positions for the upcoming fire season at various outstations. The Mountain City Ranger District, Elko Office is recruiting for positions on the Mountain City engine stationed at Gold Creek Guard Station near Mountain City.   Interested applicants may apply for these positions
beginning December 1, 2009. Vacancies are posted on the USAJOBS website, with links to the AVUE website to submit an application for the Forest Service fire positions.

Selected applicants for primary firefighter positions with the BLM or the Forest Service must also pass the “pack test” after entering on duty.  The pack test consists of a 3-mile walk over flat terrain carrying a 45-pound pack in 45 minutes or less.

The Eastern Nevada Agency (ENA) of the Bureau of Indian Affairs is recruiting for on-call firefighters and camp crew help..  Applications are available at the front desk at the BLM Elko Office, 3900 E. Idaho St. in Elko, and are also available from the BLM Elko Fire and Aviation website at www.nv.blm.gov/elko/fire.  Applications must be completed by new applicants and returning ENA employees and returned to the BLM Elko District Office no later than April 23, 2009.  For more information about ENA on-call firefighting positions, call the hotline at 775-753-0301.

There will be a Job Fair at the BLM Elko office during the holiday season to assist interested applicants with the application processes, including having computers available to apply online, on January 6, 2010 from 6-8 p.m.

Applicants must be U.S. citizens and at least 18 years of age (16 years old for ENA camp crew positions).  The federal government is an equal opportunity employer, and all applicants will receive equal consideration without regard to race, color, age, sex, religion, marital status, sexual orientation, national origin, political affiliation, handicap or other non-merit factors.