Book Review: The Return of the Great Depression 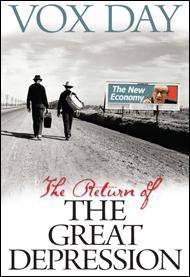 Ordinarily, I bypass books with prophetic titles. In the case of The Return Of The Great Depression by Vox Day, I was willing to make an exception. I’ve been lurking on Vox’s Blog for years, as well as reading his WND columns, and like most bloggers who have been around for years, he can be counted on to at least be thought provoking. Vox has an eclectic set of interests and his writings are where I was introduced to the Austrian school of economics.

Unlike the Keynesianism, which has made a comeback lately, and the Chicago school of monetarism, which has recently failed, the Austrians place subjectivity as the most important idea when trying to understand an economy. The battle between the scientific, or political economists as Vox calls them, and the philosophical economists, who emphasize logic rather than statistics, seems to me to be the main difference between them all. The Austrians and their offshoots are definitely in the philosophical camp.

As I’ve grown older, I have come to the realization that nobody really knows anything, so I wasn’t too surprised when I got to Chapter 4 entitled, “No One Knows Anything.” It is here where Vox’s use of logic really shines. He dissects Gross Domestic Product (GDP), Gross National Product (GNP), and Unemployment numbers (U-3, U-6), and shows how subjective these statistics really are. They all begin with a set of assumptions about future events, then categorized by what the economist believes to be already true. Should any one assumption become untrue, or categorization turn out to be misplaced, the statistic will need to be revised. Since these statistics are revised all the time, this chapter should be required reading for anyone who has ever believed anything in the mainstream press.

For the more politically minded, anyone still wondering what all the fuss over Ron Paul was about last year, this book provides the answers. It includes the best argument from the right against Reagan era monetarism that I’ve ever read. Like Keynesianism, monetarism requires government intervention and top-down management of the economy. For those on the left, former Labor Secretary Robert Reich comes through looking fairly reasonable, while Paul Krugman’s critique of Austrian theory is mercilessly dismembered point by point. There is also a nice section on the early development of Austrian theory, it being a response to the German scientific method that was being adopted by 20th Century fascists.

For myself, I tend to gravitate towards the philosophical rather than the scientific for the simple reason that it is easier to understand. That doesn’t mean they’re right. To his credit, Vox goes out of his way to explain the various ways he could be wrong. This book is an honest and multi-faceted look at our current situation. We may or may not suffer a full blown depression, but one thing is certain; debt can either be paid (deleveraged) or not paid (defaulted). In either case, we have a hard time ahead. Whether it is next year or next decade, at some point the music stops, the dance ends, and the band will want what is due.