Book review: The good, the bad, the spin 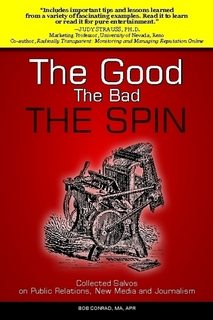 Over the years, I’ve met several people who have said they’re writing a book. I even looked into it once myself, before deciding that blogging is much easier. So when my friend, Bob Conrad, said he was writing a book I didn’t think much of it. Those who know Bob better than I do probably weren’t surprised when Bob not only finished writing it, but has now had it published.

The Good, The Bad, The Spin is an interesting look at the convergence of journalism, public relations, and on-line technology. Bob uses short, 1-2 page stories to illustrate the points he’s making; many of which are first hand accounts of his own experiences. He also uses stories pulled from recent headlines.

One of the main points of the book is the importance of accuracy. Bob is of a scientific mind and he devotes one section of his book to scientific reason versus commonly held beliefs. I can’t say I completely agree with him on the primacy of science. Scientists are human too, after all, but a little research goes a long way. The scientific approach is a good one for people working in PR, but there is still the problem of getting facts through the filter of journalists.

And that brings up a second major point of the book, the need for a greater amount of respect among the various types of communicators. Journalists and PR people tend to be wary of each other. A healthy skepticism is always, I believe, a good thing. Pride and turf wars seem to be more common among professional communicators. There are some good lessons here for us bloggers.

When I finished reading the book, I was a little mystified in that there is no formal conclusion, no over-arching theory of everything. After thinking about it, it makes sense that there isn’t one. Technology changes rapidly and the state of communication is very much in flux. How this will develop over time is any one’s guess. No matter who you are, or how you interact with the on-line world, this book is a good reminder that the ultimate goal of communication is the dissemination of truth.