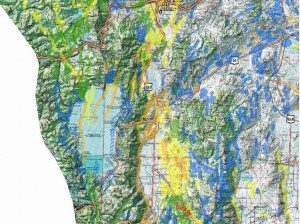 A map showing faults in the geographic region.

Nevada residents, emergency planners and managers, and other public officials will now be able to easily locate homes, schools or businesses in relation to mapped earthquake fault lines throughout Nevada, and, using a new earthquake potential-loss report, be able to assess probabilities and consequences of various magnitudes of earthquakes in 38 communities around the state.

“These new resources will be valuable tools for the homeowner and emergency managers throughout the state,” Jon Price, state geologist and director of the Nevada Bureau of Mines and Geology at the University of Nevada, Reno said. “After all, Nevada has one of the highest incidences of earthquakes in the nation and this helps everyone plan and prepare for their specific circumstances.”

The Nevada Bureau of Mines and Geology (NBMG) has created an interactive earthquake fault map of Nevada, which demonstrates that earthquakes occur essentially everywhere in Nevada. In addition, the potential-loss report, for virtually all the communities in the state, demonstrates that the consequences of earthquakes can be huge in Nevada, particularly if individuals are not prepared, Price said.

The report is a major NBMG effort that includes over 400 individual earthquake scenarios using the Federal Emergency Management Agency’s loss-estimation computer model, HAZUS. It includes summary tables showing total economic loss, numbers of buildings receiving extensive to complete damage, number of people needing public shelter and hospital care, and number of fatalities for each of the 38 communities, broken down by numbers for the county in which the community is located and for the entire State of Nevada.

Many scenarios involve earthquakes that are large enough to affect multiple counties as well as a multi-state region if appropriate. Also included are summary tables that rank the 38 communities by probability of earthquakes actually occurring and by loss for a magnitude 6.0 earthquake (the size of the Wells, Nev. earthquake in February 2008).

A demonstration of the interactive map and presentation of the quake probability report will be made to the Nevada Earthquake Safety Council at its meeting Nov. 4 at the offices of the Clark County Department of Development Services in Las Vegas.

The Quaternary fault map and dataset are offered for Nevadans to become familiar with the sources of major earthquakes in the state and appreciate their widespread nature. Nevada is earthquake country, whether one thinks about the many major historical earthquakes that have occurred or the multitude of faults across the state.

Damaging earthquakes are a relatively rare occurrence for any individual community, but, unfortunately, the huge consequences of earthquakes when they strike can’t be ignored. Nevadans should take stock of their local earthquake hazard and make basic preparations to be safe and survive earthquakes.

New shake table added to arsenal at University of Nevada,...