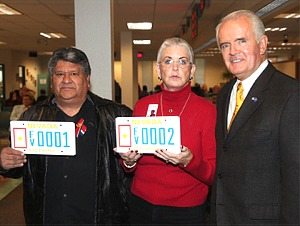 Roger Varela, a Fernley resident and the founder of the Gold Star Families of Northern Nevada, was presented Gold Star license plate 0001. Varela’s son Ray was killed near Baghdad May 19, 2007 when his vehicle was struck by an improvised explosive device (IED).

The Gold Star plate, available statewide as of Nov. 9, was authorized by the State Legislature last session and signed into law by Governor Gibbons last May. The Gold Star license plate does not raise funds for any organization. The cost for a set is $1 which is the cost to produce the plate.

The Gold Star plates feature a single gold star next to the letters “FV”, which stand for Fallen Veteran. The Gold Star license plates can be purchased only by close relatives (parent, child, brother/sister, grandparent, step-parent, and step-child) of a member of the military killed in the line of duty.