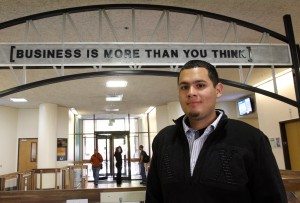 University of Nevada, Reno Business major Cesar Garibaldo was chosen as one of the top 35 scholars to attend the Karen Marquez Institute in Washington, D.C. the last week of October, 2009. University photo by Jean Dixon

A University of Nevada, Reno student has been named one of the top 35 Latino business students in the country by the Hispanic College Fund.

Cesar Garibaldo, a senior majoring in information systems and accounting, has been supporting himself since he was 16 years old, earned a 3.8 GPA and Millennium Scholarship at Hug High School, and is on the Dean’s list at Nevada’s College of Business with a 3.7 overall GPA, and a 4.0 GPA within his majors.

Garibaldo has earned $19,000 in scholarships from the Hispanic College Fund in his four years at the University, being chosen as one of the top 500 students of about 40,000 who applied for the scholarships each year. However, this is the first year that Garibaldo was chosen as one of the country’s top 35 scholars, earning him a trip to attend the Karen Marquez Institute in Washington, D.C. two weeks ago, where he spent a week learning from and networking with the nation’s top CEOs and governmental leaders.

Garibaldo’s passion is database design, and he will be doing an internship with Microsoft this spring. He is applying for a summer internship with Google, and already has a job offer from J.P. Morgan, where he served an internship last summer and was the first student they recruited from the West coast.

“They have always recruited students from the East and the Ivy League schools, so it was a real honor for them to have chosen me,” Garibaldo said.

Garibaldo’s family immigrated to the United States when he was four years old. Concerned with the neighborhood and violence where they were living in the Los Angeles area, Garibaldo’s mother decided to move the family to Reno when he was 12 years old.

Where are all the substitute teachers?

Beth Smith named to school board

Here’s what I tell teachers about how to teach young...