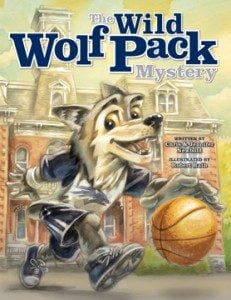 Children of all ages are sure to enjoy following Alphie, the Wolf Pack mascot, through a series of community-based adventures in a new book set for release Thursday. The Wild Wolf Pack Mystery, authored by Chris and Jennifer Newbold, features Alphie and his search for the lost gameday basketball through notable locations in the community, including Peavine Mountain, Lake Tahoe, the Quad on the university’s campus and the Truckee River.

“The Wild Wolf Pack Mystery represents the admiration we have for Nevada, the uniqueness of Alphie and the spirit of the community in Northern Nevada. That is a very important aspect of the book – the sense of place and the pride it instills in the children of the community. It was a ton of fun to produce and we think the book is one that Wolf Pack fans will enjoying reading time and time again,” said Jennifer Newbold.

The book, which has appeal to children of all ages is targeted to toddlers through age 8. It features fun Nevada facts (“Alphie says”) as Alphie tracks down the missing basketball by visiting Northern Nevada and campus landmarks. And the book delivers a great message as Alphie learns a lesson about honesty.

The book, which is illustrated by Robert Rath, will be unveiled Thursday at a reading by Jennifer Newbold at the Child & Family Research Center’s Kindergarten classroom at 1 p.m. The classroom is located at 38 West 11th Street (between Virginia and Sierra streets). Nevada men’s basketball coach David Carter and women’s coach Jane Albright will be on hand for the reading.

The book will be available for purchase and Chris Newbold will be available to sign copies at the university’s Hoops and Treats event Friday at Lawlor Events Center (12:45 p.m.-2 p.m.) as well as at the Wolf Pack’s football game against Hawaii on Saturday. A halftime presentation of the book is planned during the game and Newbold will be signing copies near the Silver and Blue Outfitters’ trailer behind the south end zone stands during the second half.

The Wild Wolf Pack Mystery retails for $21.95 and will be available through statewide bookstores, gift shops and grocery stores. It will also available through online retailers such as Amazon.com, the Associated Students of the University of Nevada bookstore, Silver and Blue Outfitters and through the book’s distributor, Farcountry Press, at www.farcountrypress.com.

Chris and Jennifer Newbold reside in Missoula, Montana and have a love of collegiate athletics, having authored similar books for the University of Montana and the University of Wisconsin. They spend most of their time cheering on their children, son, Cameron, 3, and daughter, Mallory, 1.

Robert Rath is an illustrator and designer living in Montana. He illustrated The Great Monte Mystery, The Big Bucky Badger Mystery, First Dog: Unleashed in the Montana Capitol, and has worked for clients such as Farcountry Press, Scholastic Books and Lucasfilm.