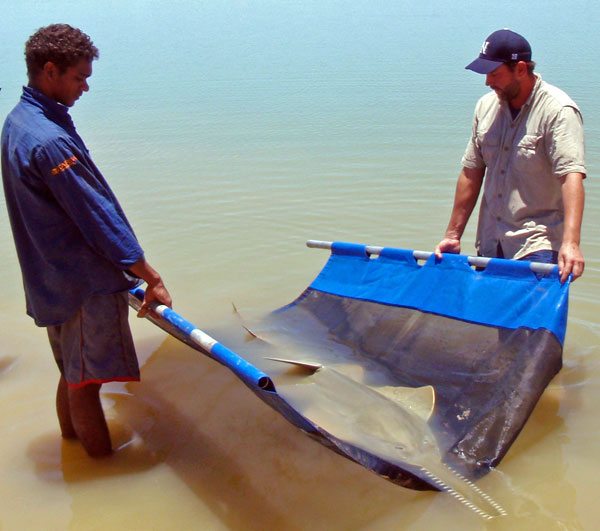 UNR NEWS RELEASE –It’s all in a days work for Zeb Hogan, traveling 150 miles up a river in the Australian outback on an expedition to find the elusive and highly endangered freshwater sawfish.

Hogan, a researcher with the University of Nevada, Reno and a National Geographic Explorer, circles the globe as part of his five-year Megafishes Project to find, study, and protect the largest freshwater fish in the world. His efforts are chronicled by the National Geographic Channel, which premieres the first new show Monday, Oct. 19, “Hooked: Monster Fish of Australia,” and the second new episode Nov. 2.

“Northern Australia is one of the last places where healthy populations of sawfish occur, in part because the area is so remote,” Hogan said. “We were working in an area the size of California, yet only 38,000 people inhabit the region, many of them indigenous Australians (aboriginal people).”

The species of sawfish Hogan is pursuing, Pristis microdon, is a freshwater native of Australia that can grow to 23 feet long – longer than a Great White Shark. It has a long, flat snout and 14 to 22 razor-sharp “teeth” on the outside of the snout. Some people say it looks like a combination of a shark, a stingray and a chainsaw. It clearly falls into the definition of a megafish: more than 200 pounds or more than 6 feet long.

Together with local scientists, Hogan takes a dangerous journey 150 miles up the Fitzroy River, encountering saltwater crocodiles, bull sharks and giant stingrays along the way as they seek to tag, study and protect this bizarre-looking predator that is nearly extinct in many parts of the world.

“We stayed for about two weeks camping and conducting surveys,” he said. “We had to bring all the food, water and equipment we needed to be self-sufficient on a long trip.”

Sawfish are among the most endangered animals on Earth. All seven species are considered threatened with extinction, mainly due to over-harvest, Hogan said. The sawfish’s unique saw-like snout makes it vulnerable to overfishing because it’s teeth tangle easily in nets. As the use of nets has increased over the past 50 years, sawfish populations have plummeted.

The second of Hogan’s new programs, “Hooked: Monster Fish of America,” premieres Monday, Nov. 2. This time he searches for North America’s prehistoric river monsters, the white sturgeon. Some populations of this aquatic dinosaur are dangerously close to extinction. To find them, he’ll travel to the Pacific Northwest and team up with scientists, divers, fishermen and a Native American tribe who are all trying to figure out why the white sturgeon is disappearing and whether dams may be putting these monster fish in danger.

His work with the University of Nevada, Reno’s Department of Natural Resources and Environmental Science has taken him to dozens of locations around the world. About half of all megafish species are in Asia, but Hogan’s project also includes those in Australia, the Middle East, Europe, and North and South America,such as the Mekong River in southeastern Asia, the Mississippi River, the Nile in East Africa and the Amazon in South America.

Determining which species are on the brink of extinction is the primary goal of Hogan’s five-year study. He said dams, pollution and overfishing are the biggest threats to freshwater megafish.

Several programs featuring Hogan and megafish have previously aired on the National Geographic Channel over the past few years.

The megafish episodes scheduled to air are:

For more about Hogan and the megafish project, visit http://www.cabnr.unr.edu/NAES/Research_Details.aspx?GrantID=583.