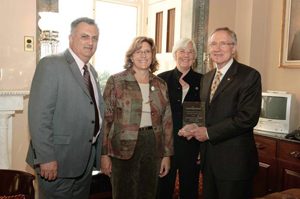 Sen. Harry Reid (D-Nev.) met with Nevada and national leaders from the March of Dimes Foundation. They thanked Reid for his efforts to improve the health of women and children by honoring him with The March of Dimes’ National Public Affairs Leadership Award.

Reid’s work to reauthorize CHIP, his sponsorship of the Prevention First legislation, his support for the Newborn Screening Saves Lives Act which was enacted in 2008, and his work on the Family Smoking Prevention and Tobacco Control Act earned him recognition.

“Sen. Reid is an outstanding advocate for women, children, and their families,” said Dr. Jennifer L. Howse, president of the March of Dimes. “His leadership of the Senate, and his deep understanding of the need to make health care accessible to all, has led to the enactment of many key bills that are central to the health of all Americans.”

The representatives from the March of Dimes Foundation asked Reid to continue his support to address the unique needs of pregnant women, infants, and children in the Senate’s efforts to reform health insurance.

March of Dimes supports giving states the option to expand eligibility for Medicaid family planning services, a provision that has long been supported by Reid and was included in the Senate Finance Committee bill for health insurance reform.