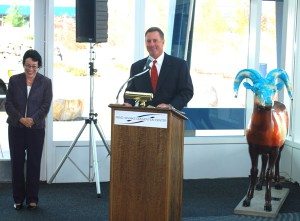 The Reno-Sparks Convention and Visitors Authority (RSCVA) announced today that Reno Tahoe has been selected to host three significant conventions beginning in 2012.

The RSCVA estimates these three groups will generate approximately 76,615 room nights in the destination, attracting nearly 115,000 visitors between 2012 and 2017.

“Reno Tahoe is a great meeting and convention destination, offering something for everyone to enjoy,” said Ellen Oppenheim, RSCVA president and CEO. “During these challenging economic times it is significant that the RSCVA has landed these three pieces of repeat convention business. We are excited to welcome these visitors to the destination and are working very hard to create the best possible experience for them.”

“We are very excited to welcome the Wild Sheep Foundation to Reno for the first of six consecutive years,” Oppenheim said. “Having a group book business for this length of time is extraordinary.”

The Wild Sheep Foundation estimates its event will generate 5,000 hotel room nights annually. The organization also estimates that more than 5,000 participants will attend the show. The hotel partners for the January 30 – February 8, 2010 convention are the Silver Legacy Resort Casino and the Atlantis Casino Resort Spa. The 2010 event marks the 15th time the group has visited Reno. It is the first time the group will utilize the Reno-Sparks Convention Center.

“We selected Reno Tahoe because the destination is focused on hospitality and understands the conservation market,” said Gray N. Thornton, Wild Sheep Foundation president and CEO. “The combined support of the RSCVA and the many fine hotel properties makes Reno the ideal place for the Wild Sheep Foundation Convention and International Sporting Expo. We are very pleased to come home to Reno.”

The Northern California Volleyball Association (NCVA) is currently under contract for April 2011. With this new contract, NCVA will bring its Junior Volleyball Spring Tournament to Reno for six consecutive years beginning in April 2012.  Annually, the NCVA estimates that the Spring Tournament will generate more than 8,000 room nights and attract more than 15,000 participants to the destination annually.

Additionally, the Veterans of Foreign Wars of the United States (VFW) will host their national convention in Reno in July 2012. This group was previously in Reno Tahoe in 2006. The VFW organization estimates this event will generate more than 13,000 room nights and attract approximately 10,000 participants.

This announcement comes on the heels of Reno Tahoe being selected to host the 2010 USA Volleyball (USAV) Girls’ Junior National Championships. The competition will take place June 24-July 3, 2010 at the Reno-Sparks Convention Center. This event is expected to generate 40,000 room nights over 10 days.

The USA Volleyball Championship is a major program of USA Volleyball and currently involves 788 teams and spectators. Going into its 31st running, the 2010 USA Volleyball Girls’ Junior National Championships will attract an estimated 9,500 athletes to Reno Tahoe. The tournament will crown 19 champions in age divisions ranging from 12 to18. Further, the event draws not only thousands of family and friends, but hundreds of college recruiters looking for the next top players for their programs.