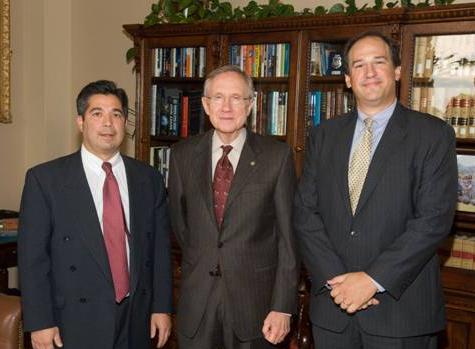 WASHINGTON, D.C.–Sen. Harry Reid today met with Obama administration officials about the compensation program for sick Nevada Test Site workers. At the meeting were Seth Harris, who was unanimously confirmed by the Senate in May to be the Deputy Secretary of the Department of Labor, and Dr. John Howard, who was appointed in September to be the Director of the National Institute for Occupational Safety and Health. The Department of Labor and NIOSH, along with the Department of Energy, are responsible for implementing the Energy Employees Occupational Illness Compensation Program (EEOICP).

“Seth and John gave me their personal assurance that it’s a top priority to strengthen their agencies’ implementation of this compensation program (EEOICP),” Reid said. “It’s so important that we do right by our sick Cold War veterans. I look forward to continuing to work with them to make sure Nevadans are being served well.”

University of Nevada, Reno presents rare performance of play too risqué for colorful Virginia City in its heyday