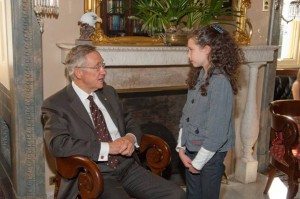 Sen. Harry Reid talks with Rylee Gustufson, 12, of Henderson about her illness with E. Coli. Rylee was infected in the 2006 spinach E. Coli outbreak.

WASHINGTON, D.C.—Sen. Harry Reid met with victims of food-borne illness including victims of the 2006 outbreak of E. Coli in raw spinach. The families are part of a coalition advocating for food safety legislation including increased authority of the Food and Drug Administration, more funding for public health departments that represent the front line of defense and making necessary reforms to create a health care system to help the victims of food-borne illness.

According to the Centers for Disease Control, 94 to 96 percent of victims of food-borne illness never find the source of their illness.

Rylee Gustufson and her parents came from Henderson to share her story. Rylee was 9 years old when she ate contaminated spinach the day before her family left on vacation. On the trip to San Francisco she got seriously ill and spent the next month in UCSF Children’s Hospital.

Food poisoning caused failure of her kidneys, swelling around her brain and heart, the development of diabetes, and temporary deafness and blindness, and she could not breathe on her own. Rylee spent another two months recovering from her illness.

“I understand the urgency of passing food safety legislation. I want to work with the Health, Education, Labor and Pensions Committee Chairman Tom Harkin to create a bill with strong protections for our families,” said Reid.

“These families are another example of why health insurance reform is so important. Rylee deserves health coverage that won’t exclude her based on a preexisting condition or cap her expenses. It is a tragedy that she got an infection from regulated products in the first place; it would be worse if we didn’t provide a future where she can get the care she needs.”